The Walking Dead #150 was a let-down for yours truly. But I’m not sure I have any right to  it a let-down.

In this milestone issue, Rick continues to ponder the community’s next move after the Whisperers killed so many of their people. But after he is attacked by two of his own people, Rick announces that his community will not stand by and be helpless. The time has come to form a military. The world of The Walking Dead may never be the same.

I’ve made it sound more epic than the issue actually is. But this seems like a story we’re meant to look back on later and say: “That’s where they started in that direction.” 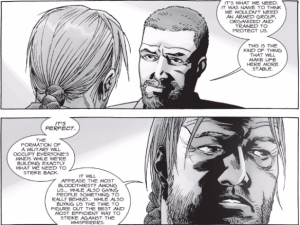 I came into this issue thinking about the book’s previous landmark issues. In The Walking Dead #100, Negan made his debut and promptly bashed Glenn’s head in with a baseball bat wrapped in barbed wire. In issue #125, Rick had a big confrontation with Negan that ultimately led to his victory over the sadistic potty-mouth. The Walking Dead #150, a bloody fight notwithstanding, doesn’t give us anything like that. There aren’t any of the book’s trademark heart-wrenching moments or daring escapes. There isn’t a major triumph for anyone. This isn’t a bad thing, per se. But it does leave you saying: “That’s it?”

The notion of Rick being some kind of military leader indicates he’s going down a path once walked by the likes of The Governor and Negan. As we see in this issue, Rick has more compassion than either of them. But how exactly does one run an virtuous, humane military in a world where virtues and humanity are often lost to carnage and brutality? What does a post-apocalyptic military even look like? How does it work? It seems these are the questions we’ll be examining going forward. The concept is intriguing to be certain, particularly with Negan in the wings.

We don’t see much of Negan (shown right in issue #149) here, but he’s cast very well in this devil-on-your-shoulder type role. The scenes in previous issues where he’s talking to Rick from his cage bring The Silence of the Lambs to mind. There’s a moment in this issue where Rick is talking to Eugene about artillery, and he says: “The Whisperers won’t know what f***cking hit them.” This subtle nod to Negan’s influence on Rick hints at one of the dangers he’ll face going forward. How does he keep his community from crossing too many lines, and becoming a new version of the Saviors?

As for the fight scene, it definitely fills the gore quotient. Rick sinks his teeth into his attacker’s neck, showing us he hasn’t lost any of the savagery that helped him survive in the old days. That’s where all the blood we see on the cover comes from, and Rick uses it to help rally the community behind him.

On that subject, near the end of the issue many of the community members actually chant Rick’s name (shown right). This is one of the rare Walking Dead moments I would classify as lame.

Charlie Adlard is Charlie Adlard. At times it feels like that’s the only way to describe the art in this series. The man has made himself into a legend. He’s been with these characters so long, and has been so consistent with his work that he brings a familiarity to every issue. Every movement or expression from Rick or one of his cohorts feels natural, because no one knows them like Adlard. That’s one of the reasons these characters feel so real.

The Walking Dead #150 isn’t a thrilling read, but Kirkman and Adlard are continuing to lay groundwork for thrills to come. That might not make for overly compelling content now, but given what’s come before, I’d wager the future still looks bright for The Walking Dead.