Roman Reigns def. Sheamus. Vince McMahon announces Reigns will defend WWE Championship in Royal Rumble Match. On paper, this Royal Rumble thing is awesome. It changes the chemistry of the Rumble Match completely. This is bound to draw comparisons to the 1992 Rumble Match, when Flair won the title. But now we actually have an active champion defending his title in the Rumble, which has never been done before. And if WWE does want to take the title off of Reigns, this allows them to do it without him losing much face.

They can also pack the Rumble with a lot of big names, and dangle the very real possibility of a title change. We know Big Show is in the match, though apparently not number one, as he seemed to indicate last week. I can only assume Brock Lesnar’s return next week will involve him announcing his entrance into the match. I can only assume John Cena will participate. They can even throw The Undertaker in there…

My question is, what if we get to the Rumble and the fans aren’t behind Reigns? If Brock is in there, they’re bound to side with him. God help them if fans hijack the Rumble for the third year in a row. And whatever they do, they’d better not mention Daniel Bryan’s name. At all. Like, for the entire month.

Also, it must be said that Jason Solomon over at The Solomonster Sounds Off pitched this weeks ago. One of my favorite podcasts, by far.

As far as the match went, it was classic Stone Cold/Attitude Era storytelling. The lead babyface against the ref who won’t count. But in the end, the babyface gets the win. Reigns doesn’t act like Stone Cold, but he’s benefitting from a lot of the same stories Austin did. And of course, the crowd wasn’t even half as hot as the crowds in those days.

Chris Jericho returns to Raw, interrupting The New Day. It’s always nice to see Chris Jericho. But my God, what was the deal with that vest? It made him look like he had a gut. And Chris Jericho does not have a gut. He does DDP Yoga!

The point of this segment was to announce Jericho’s involvement in the Royal Rumble Match. Now that the title is on the line in the match, the more big name stars they can throw into that match, the more credence it has as perhaps the most must-see Rumble in years. It would be nice for Jericho to stick around until Wrestlemania. But even if he doesn’t, he serves a valuable purpose.

Becky Lynch grabs the tights to get a win over Charlotte. So wait…last week Sasha Banks, a heel, beats Becky with a handful of tights, but the announcers can’t be bothered to mention it. Now this week, Becky beats Charlotte with a handful of tights, and they do acknowledge it. I get what they were doing here with the whole “fighting fire with fire” thing. And if they’re trying to correct last week’s mistake, then good for them. I doubt that’s the case, though. Simply put, it’s backwards to point out when a babyface cheats, but totally ignore it when a heel cheats. 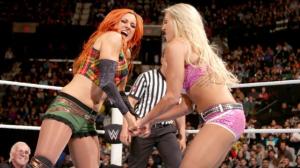 I’m on the fence about Ric Flair being at ringside with his daughter every week. He’s one of the biggest stars the industry has ever seen. He’s always going to overshadow her on some level. I get that they’re going for a “Daddy’s Girl” type character with Charlotte now. But we understand that Charlotte is Flair’s daughter without him having to physically be there with her every week. Wouldn’t it be more effective for Ric to be with her strictly on special occasions?

Kevin Owens def. Neville, gets elbow dropped through a table by Dean Ambrose. Ambrose came off surprisingly white meat on commentary for this one. It was nice that he put over Neville as well as he did, though.

Kevin Owens continues to be the best heel WWE has. I’ll give Michael Cole and the announcers some credit here, as they told the story about Owens being bitter about losing the title to Ambrose, and beating up Neville as a result. They also gave us a nice image with Ambrose next to Owens on the crushed table. This isn’t a hot feud, necessarily. But the talent of the players involved makes it very intriguing. 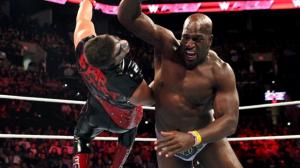 Titus O’Neil def. Stardust. Obviously, they’re aiming to push Titus as a single star again. But this time they seem to have the right idea, pushing him as a babyface, as opposed to a heel. Titus is extremely likable and charismatic. This feels much more organic.

Heath Slater def. Dolph Ziggler with help from Curtis Axel, Adam Rose, and Bo Dallas. I’m happy for Heath Slater, and for the contingent of fans that have wanted this for him for quite some time. But damn…Dolph Ziggler. This guy is still one of the most dynamic, charismatic performers they have. And he just lost to Heath Slater, and his newest group of jobbers. Terrible. Just terrible.

WWE reportedly signs AJ Styles, Shinsuke Nakamura, Doc Gallows, and Karl Anderson away from New Japan Pro Wrestling to compete on NXT. For hardcore fans, this is huge news. Especially in the case of AJ Styles, who is arguably the best wrestler in the world right now, and the biggest name in wrestling never to sign with WWE.  Long time WWE fans will also remember Doc Gallows from his previous run as Festus/Luke Gallows. I hate to admit that I’m pretty ignorant about Nakamura and Anderson, though I’ve heard wonderful things about the former.

This will undoubtedly be a huge shot in the arm for NXT, and hopefully allow names like Finn Balor and Samoa Joe to move up to the main roster in the near future.