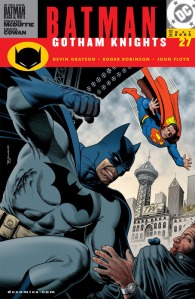 Gotham Knights was a third-string Batman title that ran for 75 issues between 2000 and 2006. But the stories it presented were often far from third-string. You won’t find a better example than issue #27, which brought Batman and Superman together under less-than-ideal circumstances.

This issue was part of the Bruce Wayne: Fugitive crossover, which saw Bruce become the prime suspect in the murder of his girlfriend, Vesper Fairchild. Vesper, a journalist, had discovered that Bruce Wayne was Batman, and was debating whether to expose his secret when she was murdered in Wayne Manor. The evidence pointed to Bruce as the culprit. Readers were even left to question whether he had actually done the deed. Believing his Bruce Wayne identity had become a liability, Batman opted to leave him behind, and become The Dark Knight full time. This didn’t sit well with his surrogate family, and even culminated in confrontation with Nightwing. But Batman’s mind was unchanged. Bruce Wayne was gone.

According to Greg Rucka, one of the writers behind the Fugitive storyline at large, the idea behind the crossover was to get Bruce to see just how far into the darkness he had gone. Recent events such as the Earthquake that destroyed much of Gotham (see No Man’s Land), the shooting and retirement of Jim Gordon (see Officer Down), and now the death of Vesper Fairchild, had made him more emotionally reclusive than ever. At this point, there was no room for happiness in Bruce’s world. He’d become almost unreachable.

Part of what makes the Batman/Superman friendship work is the balance in ideals. When they’re portrayed best (in my opinion), here’s an inherent bleakness and cynicism to the Dark Knight Detective that’s balanced by the compassion and optimism of the Man of Steel. You’ll rarely find that on display more prominently than in this issue, as Clark reaches out to Bruce to try and pull him back from the abyss.

We get a nice illustration of that balance pretty early here, as Superman has to physically stop Batman from pummeling a street crook. He also reveals a handful of bullets, indicating he’s been watching Batman’s back for a bit.

Then it gets good. Clark tells Bruce that he knows he didn’t murder Vesper. That’s a fantastic illustration of the trust that exists between the two of them. Yes, Superman is an optimist (or at least he was at that point). But even he couldn’t ignore the evidence, which pointed to Bruce as the killer. But he still knew Bruce well enough to understand he couldn’t have done it. That’s so perfect. In contrast, if this story were done now, I get the impression our heroes would have spent most of the issue hitting each other.

Without the question of guilt, Clark asks Bruce why he isn’t trying to clear his name or protect his real identity. After some action, Batman responds: “This is my ‘real identity.'”

Superman accepts that response, but gives him a nice little monologue before he leaves.

“It is your true nature to cover up your grief and hide any shame or fear you might feel behind your mask. And it’s in your true nature to refuse help, and to work through your own doubts. So having offered my assistance and expressed my concern, I can leave now, saying what I always say before I go: I’m here if you need me and I trust you…Bruce.”

BOOM. That. Right there. A little too talky and psychoanalytical for an actual conversation? Maybe. But I don’t care. That’s friendship right there, ladies and gentlemen. Clark didn’t push Bruce to go one way or the other. He simply offered his concern and opinion, then said “I’m here if you need me.” There were no punches thrown, no arguments or scathing remarks. As much as any book has ever done, this issue made the friendship between Clark and Bruce seem real. 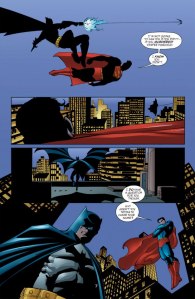 Our artistic team does a nice job of making Superman look out of place in Gotham, as he should. Penciller Roger Robinson, inker John Floyd, and colorist Gloria Vasquez make sure his bright red colors stand out among the blacks, deep blues and darker violets. Robinson gives our heroes a dynamic look for this relatively quiet issue. But given how iconic they both are, it works.

It’s also worth noting that this issue’s “B story” sees Alfred debate whether or not to read Bruce’s private journal. Considering what we’re getting from our heroes in this issue, it’s obviously dwarfed by comparison. But the art looks damn fine.

Even in a medium famous for its BAMs, SMACKs, and KAPOWs, a fight isn’t always the answer. Sometimes you just need to put the characters together, and they almost write themselves. But I guess that’s not a good recipe for an action blockbuster to start your cinematic universe.