John Cena has long been the poster boy of the WWE. But as we know, nothing lasts forever. With the likes of Brock Lesnar, Roman Reigns and Dean Ambrose garnering substantial column inches, how is Mr. WWE coping with such changes?

The 38-year-old Cena made his television debut in the WWE back in 2002 against wrestling legend, Kurt Angle. Since then he’s gone on a meteoric rise to stardom, and is currently the fourth longest serving wrestler to ever feature in the organization. Only Bruno Sammartino, Bob Backlund and Hulk Hogan have appeared in WWE for longer periods.

His most successful time in the promotion was arguably between 2006-2010. Cena has won multiple titles and his popularity has extended past his wrestling roots. The promotion has sent the Florida native to the silver screen, bankrolling two films starring Cena: The Marine and 12 Rounds.

WWE Chairman Vince McMahon has a proven record of building stars and turning them into household names. You only have to reference the likes of the aforementioned Hulk Hogan, Stone Cold Steve Austin, and The Rock to see how the pro wrestling business mogul has a track record of developing talent.

Fast-forward to the modern day, however, and Cena is in the latter portion of his career. There’s been an obvious shift in emphasis by the WWE to develop the next Cena in the form of Roman Reigns. After all, Cena won’t be around forever, nor will part-timers like The Undertaker and Brock Lesnar. The need to develop the next slew of WWE stars is important for the promotion’s longevity.

But, how is Cena reacting to effectively taking a backseat? What is WWE’s plan for Cena in the coming years?

Like all aging wrestlers, he will undoubtedly be used sparingly. He will likely feature in all the big events, and in significant bouts that appeal to his fan base. It’s also probable Cena will become a mentor for many of the up-and-coming wrestlers WWE acquires, and within its current roster. That’s not to say Cena hasn’t been acting as a mentor for the past decade, as it is widely reported that he’s been mentoring for years and is a very influential figure in the locker room.

Although, Cena is still the biggest star at the company, especially when you consider that out of the top 60 best selling WWE merchandise items, 12 are Cena-related, far more than any other wrestlers on the roster, according to Forbes. The problem is, regardless of the progression of Reigns and other stars, the WWE isn’t ready for life without Cena even if they are lessening his standing gradually.

You only have to look at who was rumored to be facing Cena before Hell in the Cell to see how much his status as a main eventer is diminishing. Win suggested that the top 5 likely contenders to face him for the US Championship were Dean Ambrose, Tyler Breeze, Heath Slater, Daniel Bryan or Cesaro. Apart from Bryan, the list wasn’t exactly filled with the pedigree Cena is used to facing.

Luckily for WWE fans, McMahon had an ace up his sleeve. The WWE welcomed back the enigmatic Alberto Del Rio to face Cena. The previously sacked superstar would go on to defeat Cena and win the belt. And while WWE built this up to be a marquee event with the reemergence of Del Rio, it shows that Cena isn’t at the top of the pile anymore.

Numerous wrestling news outlets announced Cena was taking some time away from the ring for personal reasons. While it’s unclear when he will return, this extended absence will hit WWE hard especially with Raw ratings falling. 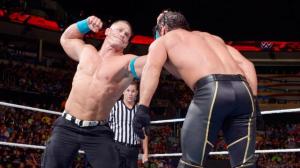 It has also been rumored that due to Cena’s hiatus, they may look to push Ambrose into more headline slots to help develop him alongside the likes of Reigns. While McMahon hasn’t been adverse to “bending a knee” to his major superstars and offering them less demanding schedules, Cena has always been very active.

It’ll be hard for Cena to take a less prominent role in the future. But, he’s always been a company man, and while taking a backseat may not be his most preferred options, the likelihood is he’ll do what’s best for the company in the long run. He’s still a financial asset, and while he’s unlikely to feature or win against some of the WWE’s fledgling wrestlers, expect him to be facing iconic stars in the promotion’s major events in the future.

Images courtesy of WWE.com and bwin.com