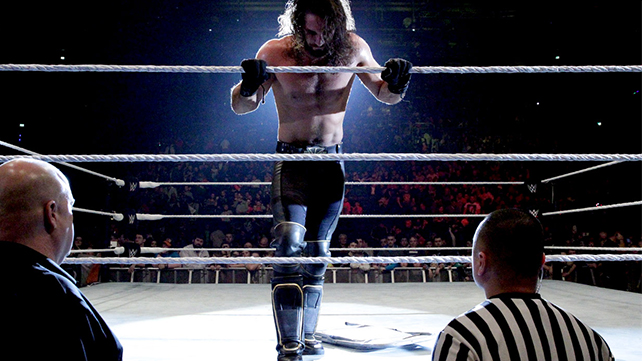 Seth Rollins is inured, and has vacated the WWE Championship. Man, is that a downer. That still photo of his knee during that sunset flip spot was brutal.

Whether or not you’ve been enjoying WWE television lately (I haven’t), it’s tough to deny they made Seth Rollins into a star this year. They really put the machine behind him, and despite being put in some tough situations, a la those long-winded promo segments, he rose to the occasion. He’s arguably been the central character on the show since Wrestlemania, and he’s had some of the best match of the year. The match with Lesnar and Cena at the Royal Rumble, the one with Orton at Wrestlemania, the matches with Ambrose over the summer. We also can’t forget the one with Cena at Summerslam, in which his angle with Jon Stewart was a big factor. So Rollins deserves credit for many of the good things we’ve seen in WWE this year. 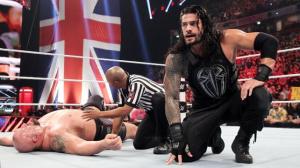 In any event, with Rollins down, Randy Orton gone with shoudler problems, and both John Cena and Brock Lesnar out on break, WWE is absolutely dying for somebody to step into a starring role. Roman Reigns seems like the obvious candidate. But there’s also Dean Ambrose, Kevin Owens, Dolph Ziggler, Tyler Breeze, and God forbid: Cesaro.

But just because opportunity exists, doesn’t mean the wrestlers, or more likely WWE creative, will capitalize on it…

WWE unveils 16-man tournament brackets to crown new WWE Champion at Survivor Series. Obviously this brings to mind the Survivor Series of 1998, when The Rock won a tournament and claimed his first WWE Title. That show meant a lot. It still means a lot, from a historical perspective. This year’s Survivor Series can mean a lot too. More than any Survivor Series in recent memory.

The thing I’ve always remembered about Rock facing Mankind in the main event that night was that neither man had been champion before. I specifically remember Jim Ross saying the WWE Title would be won by “a new man.” That’s exactly what’s going to happen at Survivor Series. With Cena, Rollins, and the others away, a new man is going to step up and become champion.

Two names that stuck out at me from the brackets were Titus O’Neil and Kalisto, both of whom are tag team competitors. It’s interesting to see them spotlighted this way. Titus didn’t last long, and I don’t expect Kalisto to either. But WWE choosing them for this role is intriguing.

Conspicuous by his absence in the brackets was Bray Wyatt. From a writing perspective, he’s obviously not going to be wrestling for the title at Survivor Series. He’s got Undertaker business to take care of. But from a storyline standpoint, it’s odd for them to exclude him in favor of a Kalisto or a Titus O’Neil. Couldn’t Undertaker or Kane have cost him a match, thus adding fuel to the fire?

Triple H tempts Roman Reigns, offers him a chance to face the winner of the tournament for the championship at Survivor Series. Triple H did some really good mic work tonight, hyping up Roman Reigns and his journey thus far, and doing an excellent job of making the temptation to “sell out” seem real and appealing. This could be the seed for a Roman Reigns swerve heel turn at Survivor Series. On the other hand, it serve as a building block for the hero WWE has been trying to create in Reigns. Either way, it made for good television.

And then they followed it up with a Roman Reigns/Big Show match. Hey, at least we didn’t have to endure it at the pay per view. 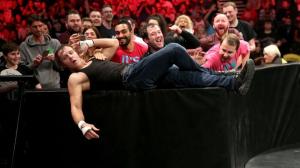 Dean Ambrose def. Tyler Breeze to advance to the tournament quarter-finals. Tyler Breeze and Summer Rae work well together, and Breeze has obviously got his character down pat. That’s obviously one of the advantages of the NXT system. Talents have time to get used to the way WWE does things, and get to hone their acts. Though he did lose cleanly to Dean Ambrose tonight, which sucks.

Bray Wyatt attempts to “eulogize” The Undertaker and Kane before the brothers appear in person. I maintain that this angle about Bray stealing ‘Taker and Kane’s “powers” is stupid. But seeing the brothers go against The Wyatt Family is undeniably appealing.

We’re obviously working toward an elimination match with the Wyatts, The Undertaker, and Kane. Logic suggests it will be four-on-four. But who do you put on ‘Taker and Kane’s side? Jason Solomon over at The Solomonster Sounds Off actually pitched a pretty good idea: The Dudley Boyz. Why not? What else are Bubba and Devon up to right now? Plus, they can feud with Harper and Rowan after Survivor Series. Everybody wins. 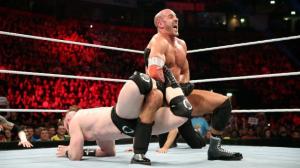 Cesaro def. Sheamus too advance to the quarter-finals, via a distraction from Wayne Rooney. Sorry, British fans. I haven no idea who Wayne Rooney is. But hey, he helped Cesaro get a big win. So he’s alright in my book.

One of the nice things about this tournament is that it inherently gives us matches for Raw next week, not to mention Smackdown. I don’t think we’ve ever seen Roman Reigns and Cesaro wrestle before. I’m definitely curious as to what they’ll put together, and even more curious to see how the crowd will act for them. Cesaro obviously won’t be winning that match, but it’s a big chance for him to deliver alongside WWE’s hand-picked golden boy for the future.

Natalya def. Naomi. So WWE is officially turning Sasha Banks babyface. Those “We Want Sasha!” chants aren’t going away any time soon. They’ve done the smart thing and embraced it as a storyline.

Also, Naomi really needs a new finish. What exactly was that spot where she leapt in the air, attempting to do the Rear View? Seriously, try a different move. Preferably one where you can see what you’re doing.