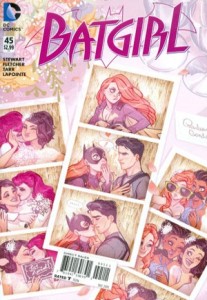 I’m a big fan of Barbara Gordon and Dick Grayson as a couple. I was as stoked as anybody when DC let Gail Simone work with them again during Convergence. That being said, the Batgirl team does real justice to Barbara by not putting her back with Dick in this issue.

There’s no supervillain in Batgirl #45, and no real crisis for Babs to overcome. Instead, we find ourselves at the wedding of her friend Alysia. Our herioine is entrusted with keeping the ring safe for the bride. But when Dick shows up before the festivities and playfully swipes the ring, things get complicated. 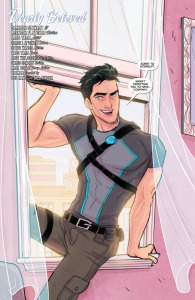 It would have been very easy to put Barbara with Dick. That option is always going to be there, and it’s always going to work. But that’s not what happens here. In this issue, Dick is actually positioned as the antagonist. It’s one of the few times in this era of “Dick Grayson, sexy super-spy” that we’re put in a position to not like him. He’s not malicious or cruel at all, but he’s clearly in the wrong. It’s surreal, but it’s done in the interest of playing up Barbara’s confidence and independence. As readers, we already knew she had those qualities. But this issue accents them wonderfully.

Simply put, Barbara stands up for herself when Dick tries to insert himself into her life romantically. She takes him to task for interrupting this special day, and that he must face the consequences of faking his own death, and what that did to the people he cares about. What makes this such a strong moment is that she’s right, and we admire her for being brave enough to put Dick in his place. It’s something he needed to hear, from the character perhaps best qualified to tell him.

Barbara’s behavior in the early part of this issue is also very true to her character. She essentially becomes the Miss Fix-It of the wedding party, and literally pulls out a “Wedding Day Survival Kit.” Not only does this work with Barbara’s personality, but having been to a whopping three weddings this month, I can tell you firsthand that every bride wants a character like that around.

From an artistic standpoint, Tarr gets to be more flowery and formal in this issue than any she’s done so far. Her work, paired with colorist Serge LaPointe’s lavenders and pinks definitely give this issue a visual uniqueness. Tarr’s rendering of Dick Grayson is also impossibly hunky, and a great representation of the temptation Barbara feels to cave in and be with Dick.

The issue ends with a mysterious teaser, likely about the next villain Batgirl will take on. Solicitations indicate Babs’ mind may be failing her, and The Spoiler will be involved. If how they interacted in Batgirl Annual #3 is any indication, things will continue to be fun going forward. And considering how fun this series has been since Fletcher, Stewart, and Tarr took over, what more can we ask?