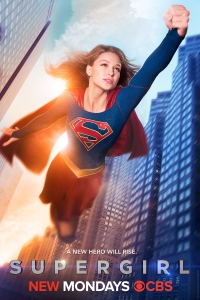 ***WARNING: Spoilers lay ahead for the pilot episode of Supergirl.***

People are understandably excited about Supergirl. In essence, the character is getting the same treatment Green Arrow and The Flash are getting on The CW. This isn’t a prequel like Smallville or Gotham (Blech). This is Supergirl, flights and tights, in all her glory. On a major network, no less.

The pilot episode of Supergirl is charming in its simplicity. It lays everything out with fairly broad strokes, which is fine for now. We have our hero, her supporting cast, a place for villains to come from, and our big bad for the season. There’s a lot of ground to explore, and they’ve got a whole season to do it.

So let’s do what we love to do around here: Pick stuff apart…

Melissa Benoist plays Kara Zor El, a.k.a. Supergirl. This was great casting. Benoist has fantastic girl next-door appeal, and seems like she was somehow custom-built to be a TV star. It seemed like she was set for stardom on Glee before that show took an even bigger nosedive in quality. Either way, she makes a fantastic Supergirl. She’ll obviously need some time to break into the role and truly make it her own, as most actors do. But give her enough time, and she’ll pull it off.

Supergirl is widely being heralded as a feminist TV show, and a celebration of girl power. As a male fan, I’m not threatened or dissuaded by that at all. Despite all the superhero movies that have come out in the last two decades, we have yet to see one dedicated to Wonder Woman, Black Widow, or any other female hero. If Supergirl is successful, it could open some doors in that respect, and bring in new fans.

Calista Flockhart plays Cat Grant, head of CatCo Worldwide. Cat Grant was almost one-dimensional in how she was written here. Granted, this is only the pilot. At certain points in the comic books, the character had some nice depth that I’d love to see explored here. But that doesn’t mean we can’t make her a villain. Several years ago during Sterling Gates’ run on Supergirl, Cat was essentially made the J. Jonah Jameson to Kara’s Spider-Man. Using The Daily Planet as an outlet, Cat was able to turn much of Metropolis against the Girl of Steel. It wouldn’t be far-fetched to imagine that happening on this show.

Incidentally, I loved her little rant about the word “girl.” That was really well written. 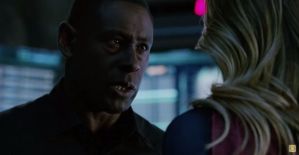 Kara becomes aligned with her sister Alex, Hank Henshaw, and the Department of Extranormal Operations to face fugitives from a Kryptonian prison. This seems like a cue from Arrow and The Flash. On those shows, both heroes have a team around them that helps them with logistics and what not. It makes sense, at least as far as the first season is concerned. The Fort Rozz angle is also very similar to what we’ve seen on The Flash. On that show, the same freak accident that gave Barry Allen his speed also created various metahumans. On Supergirl, the arrival of Kara’s shuttle accidentally released various prisoners from the Phantom Zone. This begs the question of why those prisoners are only surfacing now. But again, it’s only the pilot.

Also, in the DC Comics Universe, Hank Henshaw is the evil Cyborg Superman. Just throwing that out there.

Kara works alongside Winn Schott, who she later reveals her secret to. On the subject of supervillains, in the DCU, Winslow Schott is one of the incarnations of the villainous Toyman. Perhaps unrequited love drives Schott to madness?

While Superman’s presence is felt, he is never fully seen on camera. I was excited when I heard how Superman would be dealt with on this show. Essentially, it’s the same way Veep deals with the President of the United States. The character’s influence is felt on the show, but we never see him. I’m pleased they didn’t do anything stupid to Superman, like kill him or banish him to the Phantom Zone. But this episode leaves me wondering why Kara doesn’t have more of a direct relationship with her cousin. You’d think he’s be the one person she’d want to talk to about superheroics and what not.

From a creative standpoint, the reason for keeping Superman out of the show is obvious: He draws attention away from Supergirl. But I’d like to see some reason given as to why she can apparently only communicate with him through other people.

Image 2 from youtube.com. Image 3 from moviepilot.com. Image 4 from cinemablend.com.

One thought on “A Supergirl S1E1 Review – Keep It Simple, Supergirl”