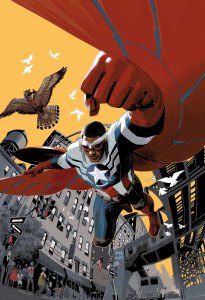 Alas, poor Sam Wilson. He flew too close to the sun on wings of partisanship…

Yeah, that’s right. Wings of partisanship. Because his suit has big wings. And because apparently, Captain America is sounding off on the issues facing his beloved country these days. Of course, this issue doesn’t tell us exactly what his opinions are. But whatever he said, it was enough for S.H.I.E.L.D. to drop him from their ranks. Captain America is now a DIY project, with Sam and his remaining cohorts resorting to crowdfunding to restore some of their resources. And what of Steve Rogers? Has Sam even lost the faith of his former partner, the original Captain America?

I like the subtext of a half the country turning Captain America for “coming out” (for lack of a better term) about his true feelings. As the character himself says, our country is so divided right now. Opinions are widely different (at times violently so) about what America should be. Captain America now reflects that. He’s not above the squabbling anymore. That opens the door for compelling, emotional storytelling. Taking S.H.I.E.L.D. resources away from Sam and his cohorts also plays up his everyman appeal. 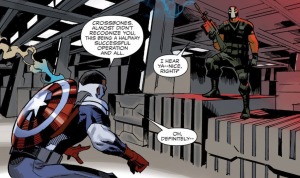 Cap runs into Crossbones early in the issue, and they have a funny little exchange. They’re about to fight, they know they’re about to fight, but first they shoot the breeze a little bit. They’re clearly enemies, but they’re almost old acquaintances too. That’s a funny dynamic. You wouldn’t want to see that with everybody, but ot’s cool once in a blue moon.

This issue also sets up a nice supporting cast for Sam. I don’t know as much about these characters as other fans do. But Sam’s partnership with Misty Knight is obviously intriguing. Nick Spencer and Daniel Acuna put together a nice sparring session between the two that’s ripe with sexual tension. On the opposite end of the spectrum, you’ve got D-Man to provide a little levity, along with some mechanical exposition. We also get a nice two-page scene between Sam and his brother Gideon, a pastor who brings a very personal, and potentially spiritual perspective to things. And of course, you’ve got our ol’ buddy Redwing. Add this all up, and it potentially gives the book some solid depth. 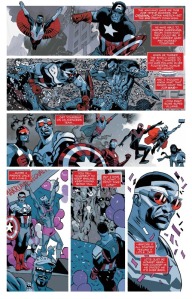 Daniel Acuna is mostly on point here. He draws a good Sam Wilson, and I love his rendering of Pastor Gideon. He’s also good with the explosive moments. He’s also good with the explosive action moments that come during fights. Where Acuna lacks here is in Sam Wilson’s acting. When he’s in the mask, he almost always has the same blank and stoic expression. Granted, Acuna doesn’t have Sam’s eyes to work with, which I’m sure makes it harder. But even during the sparring scene with Misty, they both have expressions that aren’t blank (Acuna plays with the eyebrows a bit), but feel very lifeless. I hate to use the term “Captain A-Mannequin”… so I won’t. When Acuna has Sam’s eyes to work with, things are much better. But c’mon, man! You’re not working with a Spidey mask or an Iron Man helmet! Gimmie some feeling!

Sam’s stoic nature notwithstanding, we’re off to a really good start with Captain America: Sam Wilson #1. They’ve definitely got me coming back for issue #2. Something tells me old man Rogers ain’t too happy.

2 thoughts on “A Captain America: Sam Wilson #1 Review – On Wings of Partisanship”