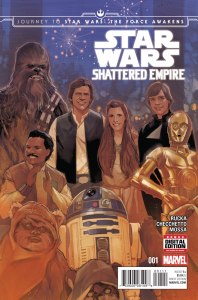 If any single issue ever suffered from “the burden of expectations,” it’s this one. Shattered Empire #1 is Marvel’s first foray into the post-Return of the Jedi era. What’s more, the cover literally depicts the final shot in Jedi. Whether this was the intention or not, that cover says to us: “Those questions you’ve all had about what happened after Return of the Jedi? The answers start here.”

Shattered Empire #1 is a satisfying read if you keep those expectations in check. The idea behind this issue, and everything under the Journey to Star Wars: The Force Awakens banner, is to wet our appetite and give us clues. They were never going to give us any big answers here. Han and Chewbacca, however, get a decent amount of page time. We also get a little bit of Lando, and a glance or two at C-3PO and R2-D2. 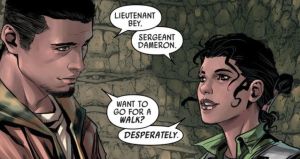 But the real stars of the book are Shara Bey and Kes Dameron. If you’ve been following the hype for The Force Awakens the name “Dameron” should sound familiar. I’m sad to say I didn’t pick it up until my second read-through: Poe Dameron is the name of Oscar Issac’s character in the movie. Fittingly, he’s a pilot for The Resistance, much like his parents are pilots for the Rebel Alliance. And apparently, he’s conceived in the pages of this issue. That’s right, folks. Poe Dameron was conceived mere hours after the Battle of Endor.

While we don’t know much about Shara and Pes (Is that pronounced like Pez?) personally, we do become invested in their relationship. This is partially because Shara is put over well, as we see her flying her A-Wing in the Battle of Endor. She even helps Luke Skywalker on his flight back to the Endor moon from the Death Star. But for my money, there’s also a certain foreboding sense about this romance. One can only tempt fate so many times, and it wouldn’t surprise me at all if as early as issue #2, one of our romantic rebels dies. 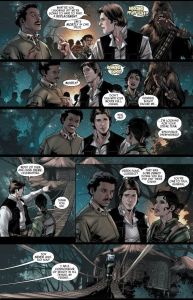 In terms of the rebels we already know from the original trilogy, we spend the most amount of time with Han Solo. But we see him through Shara’s eyes, so he’s much more a general than the daring rogue of old. What’s disappointing about this is we don’t even get a hint about where Leia is, what she’s doing, or where she and Han stand at this point. One would assume they’d both be all business regardless, and not designing wedding invitations or anything. But I was hoping for just a hint. Again, expectations must be managed for this issue.

On the plus side, we do get a really cool moment between Han, Chewie, and Lando (shown left). The ol’ smoothie never changes. Marco Checchetto and colorist Andres Mossa are at their strongest when they’re putting the Wars in Star Wars. When they’re depicting the Endor battle, as well as the subsequent battle, there’s a sense of real energy and danger on the page. Whether it’s those all-too-familiar blaster bolts whizzing past, the placement of ships on the page, or the abundance of explosions, it truly feels like the characters are in real jeopardy.

In terms of books leading up to The Force Awakens, Shattered Empire should likely be a high priority among Star Wars fans. More than anything, it’s looking like this will be more about Poe Dameron’s heritage, and some of the broad strokes of how the Empire fell and the New Republic rose. But with the movie looming closer, who knows what hints they might drop? That, and a look into the post-Return of the Jedi era should be more than enough to keep fans flipping pages.

2 thoughts on “A Star Wars: Shattered Empire #1 Review – The Burden of Expectations”