I’ve got to give WWE credit. These past several weeks, they’ve made Summerslam mean more than it has in years. They’ve got a huge main event, and a pretty big semi main event (if not a fairly underwhelming lower card), coverage from ESPN, and some celebrity involvement that could actually be fun to see.

But let’s dive into the meat of the show…

While I’m happy Summer Rae has something to do on TV these days, most of the stuff involving her, Lana, and Rusev, has been pretty cringeworthy in my opinion. What’s more, Mark Henry, once as monstrous a heel as I’ve ever seen, has been reduced to being Rusev’s TV program. I’m sure he’s fine with that, but still…

Heading into fall, I’m ready for Rusev and Lana to be back together. They make a great duo, and while Lana isn’t short on talent, she’s not going to be a Sable-like star for WWE. At least not right now. So I’m thinking Lana turns on Ziggler, giving the match to Rusev. Ziggler and Summer are both kicked to the curb, and our power couple is back together.

WWE INTERCONTINENTAL TITLE MATCH:
Ryback (c) vs. The Big Show vs. The Miz

I hate to say it, but this was a lame duck match from the start. At least it was in terms of the build up. I just can’t say I have any kind of desire to see these three work. No disrespect intended, but I’m pretty sure the fans don’t either.

In any event, this match is obviously designed to give Ryback a big win, and establish him as more of a player. I stand by what I said last week though. If you want to give him a big moment, put him against The Big Show in a retirement match, and have him win. Show doesn’t actually have to retire. But it’ll get Ryback a hell of a pop.

Yeah, it’s time to put the titles back on The New Day. I’m very happy Titus O’Neil and Darren Young got to win the titles and have that on their resume. But it’s The New Day’s time.

I’m assuming this match is one fall to a finish. So I imagine the finish will be involve some kind of interaction between El Torito and Xavier Woods, leading up to a distraction finish where either Kofi or Big E. get the pin.

This match, and the tag match for that matter, are a little too crowded for me. I understand they wanted to have all the girls on the show. But why not just do a regular triple threat match, and maybe put the Diva’s Title on the line? This just seems like it’ll be a mess.

My hope is that something happens in this match that leads these ladies away from the team storyline, and more toward individual feuds. For instance, what if Becky were to pin Nikki Bella and win the match for her team? Now we’ve got a Diva’s Title match set for Night of Champions. I want to see that title actually mean something for the first time since its introduction. And with any luck, that’ll include a makeover for the belt. I’m going with PCB on this one, in the hopes that we see a continued improvement in the women’s division.

In terms of this match, I’m more excited that Stardust is on a pay per view than anything else. Cody Rhodes is painfully underutilized by WWE, and big publicity grab like this is a big opportunity for him to show the world just how good he can be.

There’s really no mystery about who wins here. In WWE, celebs always wind up on top in the end. Unlike most of the other celebs who’ve wound up “wrestling” for the company (Kevin Federline, Seth Green, etc.), Amell is a natural athlete who will likely play his role just fine. I see this ending with Neville hitting the Red Arrow, and Amell covering Stardust for the win.

I’m assuming Randy Orton is going over here, as they’ve given him two big wins in recent weeks. He pinned Cesaro in a triple threat match, and this week he actually pinned Sheamus in a tag team match. I can only assume they’re keeping him strong in the event John Cena can’t wrestle the match, and Seth Rollins has to be put in to make this a three-way for the WWE Title. Classic WWE logic then dictates Sheamus will be one step closer to cashing in, perhaps as soon as this event’s match between Rollins and Cena. For whatever reason, WWE always jobs the Money in the Bank winner out before he cashes in. Why? Who knows. Either way, Orton wins. Now please, make this the blow off match! 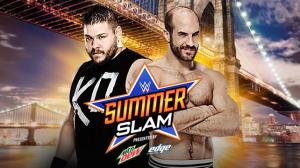 This could very well be the biggest weekend of Kevin Owens’ career. Saturday he’s in a ladder match with Finn Balor for the NXT Championship, and the very next night he’s working Cesaro. Say what you want about him seemingly being de-emphasized on TV recently, but the guy is in no shortage of high profile matches lately.

Sadly, I don’t see him beating either Balor or Cesaro. As Owens is essentially a main roster guy at this point, there’s no reason for him to take the NXT Title from a rising star like Finn Balor. As for Cesaro, WWE inexplicably had him pinned by Randy Orton last week. And of course Vince McMahon famously remarked that Cesaro has trouble connecting with the audience. But if I had to take a guess as to who WWE is looking to emphasize more these days, I’d guess Cesaro. And I’d say that’s the right move to make. Hopefully that “Cesaro Section” keeps growing.

This match sucks… Alright, maybe that’s not fair. But it could have been so much more.

Sting is just sitting on the sidelines doing nothing. After so many years, they finally got him, just to have him job to Triple H and then go away. This is one of the few times a six-man tag on pay per view would have been an ideal situation. Put Sting with Reigns and Ambrose, and put somebody, ANYBODY, with Wyatt and Harper. Bo Dallas is around. Damien Sandow is around. Even Curtis Axel could have worked. But nope. It’s simply a watered down Shield vs. Wyatt Family match.

Had Sting been with Reigns and Ambrose, I’d be inclined to give them the victory (Though with this creative team, you never know.). But now I’m leaning toward the Wyatts. I’m currently of the mindset that Reigns and Wyatt are going to have the cage at Hell in a Cell in October. So if the Wyatts somehow cheat to win here, this feud can continue. And after seeing Reigns’ match with Luke Harper this week, I’m perfectly fine with that. Those two had a really good match. Hopefully they can keep that momentum going, and get this match to overachieve. 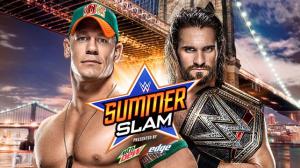 When this match was made, I assumed it meant the United States Title was going away. Which admittedly would be a weird move, considering what John Cena and his open challenge matches have done for that belt since Wrestlemania. I suppose taking that title away from Cena would be an interesting way to put heat on Rollins. But it would rob WWE of the chance to put an up-and-comer over in a huge way.

So assuming they’re not going to get rid of the US Title, how do you get out of this match with both belts still intact? You could have Rollins be a double champion, I suppose. But that seems like a waste. A disqualification finish would get them out of the match. Of course, there’s always the Sheamus option…

Either way, I don’t see John Cena walking out of this show with this 16th Heavyweight Title. They only started really playing that up this week. The idea of Cena tying Ric Flair’s record needs to hang in the air for awhile. So while I can’t say for sure what’s going to happen with the US Title, the best prediction I can give at this point is Seth Rollins picks up the win.

Brock Lesnar vs. The Undertaker

After The Undertaker hit yet another low blow on Brock this week, I’m convinced we’re getting a third another Undertaker/Lesnar match at Wrestlemania XXXII.

The story makes perfect sense. The Undertaker has never beaten Brock Lesnar in a one-on-one match. Brock took ‘Taker’s Wrestlemania undefeated streak from him. Now he wants revenge. The problem is, ‘Taker is convinced that he can’t beat Brock. Thus, the low blows. And things aren’t going to get any better when Brock beats the Dead Man cleanly at Summerslam.

So The Undertaker returns to Wrestlemania, in his home state of Texas no less, to challenge Brock to one last match, perhaps his last match. One last chance to slay the beast. If they tell the story well, it could be a fantastic build up. The only question is, how will ‘Taker’s body hold up against someone as physical as Lesnar?

There’s only one way to find out…