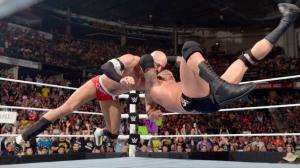 Randy Orton def. Cesaro and Kevin Owens to earn a shot at the WWE Championship later in the evening. It seemed like this match was designed to let Cesaro shine. And shine he did…until the finish. This match was tricky from that perspective anyway, as somebody had to get pinned, and that can potentially effect their momentum. You’d think the guy to lose the fall would have been the heel, Kevin Owens. But instead they inexplicably had Orton pin Cesaro with an RKO. And it wasn’t one of those “From Out of Nowhere!!!” ones either. Cesaro, who had spent most of the match stealing the damn show, just kind of walked into it. Considering the WWE appears to finally be getting behind Cesaro a little bit, this was a head-scratcher. A really bizarre choice to end an otherwise really good triple threat match.

Sheamus attacks Randy Orton, nearly cashes in Money in the Bank during title match against Seth Rollins. And what did Cesaro take the pin for? An attempt to add some heat to the dead fish program between Orton and Sheamus. What a waste.

Video package shows Steve Austin, Triple H, Paul Heyman, and others weighing in on Undertaker vs. Brock Lesnar. Again, a smart move to keep ‘Taker and Lesnar off TV until next week’s Raw. That’ll of course be the first time they’ve been in the same building since their brawl the night after Battleground.

The video package was okay. I wish they’d spent more time on guys like Shawn Michaels, Triple H, Randy Orton, and guys that were actually part of “The Streak.” Not to mention Stone Cold Steve Austin, the biggest damn star of the last two decades. Why was he just chiming in? No offense, but I really don’t care what a Kofi Kingston, or even a Dean Ambrose or Roman Reigns, thinks about ‘Taker and Brock. Give me the heavy hitters, the main eventers, the legends.

Incidentally, Triple H had a nice line with: “You can’t outrun the reaper.”

Daniel Bryan returns to Raw on Miz TV, Big Show and the returning Ryback crash the segment. It was awesome to see the fans show Bryan that much love. Whether his active wrestling career is over or not, he’s clearly earned a place in the collective heart of wrestling fans. And of course, WWE was likely counting on that, and hoping some of it would rub off on the returning Ryback.

For my money, WWE really needs to tap into those “Please retire!” chants fans are yelling at The Big Show. Hell, if they want Ryback to get over, put him in a title vs. retirement match with Show at a major pay per view. That’d draw some attention.

Brie Bella uses a Daniel Bryan spot during a six-woman tag team match. I wouldn’t have a problem with Brie using Bryan’s trademark kicks to the chest if she were playing a babyface role. But the Bellas and Alicia Fox are supposed to be heels, aren’t they? Discounting the notion that putting them in a match against another heel team is a strange booking decision. But having a heel using a spot that’s normally reserved for one of the company’s top babyfaces seemingly contradicts basic psychology. If you’re a heel, you want to be booed. So with that in mind, why use that spot at all?

Arrow star Stephen Amell to team with Neville to face Stardust and King Barrett at Summerslam. This is obviously a textbook WWE publicity stunt. But Stephen Amell is obviously an action star, and he’s clearly in amazing shape. So I’m guessing he’ll show us a cool stunt or two.

A lot of fans have why Cody Rhodes has kept the Stardust gimmick as long as he has. I’m guessing this Stephen Amell angle is one of the reasons. Whether you like this or not, at least it gives Stardust, not to mention Neville and Barrett, something to do at Summerslam. These guys are all at the same place on the card, and they have about the same amount of momentum right now. So what harm can it do?

Prime Time Players to defend against The New Day, The Lucha Dragons, and Los Matadores at Summerslam. What happened to The Ascension? They were in the mix, weren’t they? Did they just get cast aside? Eh…maybe it’s better that way. This match is all about The New Day anyway. 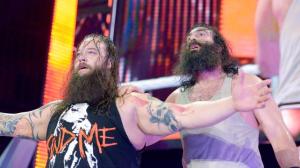 Luke Harper def. Dean Ambrose. It really feels like they’re trying to recapture some of that Shield vs. Wyatt Family magic here. But it’s just not the same dynamic. All the players are at different places in their careers.

The announcers missed the boat on the fact that this was one of the biggest wins of Luke Harper’s career. Had he gotten a few of these kinds of victories, he might not have floundered as a singles star.

In a perfect world, this whole Roman Reigns/Bray Wyatt feud would culminate in a Hell in a Cell match in October. What’s more, it would be the only cell match on that show. This is the only rivalry they have right now that would be worthy of the cage by October. So I say let’s go for it.

Image 2 from foxxfeed.com. All remaining images courtesy of WWE.com.