Rowdy Roddy Piper passes away via heart failure at the age of 61. Like just about everyone, I was shocked and saddened to hear about Roddy Piper’s passing last week. Death via heart failure. Sadly, that’s something we’re all too used to hearing about in terms of our wrestling heroes…

What’s interesting in my case is that when I heard about Piper’s death, I didn’t think about any of his matches or promos. I thought about his appearances on The Steve Austin Show. Austin is such a great interviewer, and Piper was such a brutally honest personality, that it felt like I got to know the real-life Roderick Toombs just a little bit. Despite his abrasive, annoying personality on television, he seemed like such a gentle soul. If you haven’t heard those interviews, I highly recommend them.

Dusty Rhodes and Roddy Piper. Gone within the span of two months. It’s been a rough summer for wrestling fans.

Ronda Rousey knocks out Bethe Correia in 34 seconds at UFC 190. I’m not much of a UFC or MMA guy. But from a sheer cultural standpoint, I couldn’t help but be interested in the Ronda Rousey fight this past weekend. And dear God…34 seconds. How a person, man or woman, could consistently vanquish their shoot fight opponents in less than a minute simply boggles my mind. Those fights almost aren’t worth the pay per view money they’re so short. Almost.

Also, kudos to Rousey for dedicating the fight in part to Roddy Piper. A very classy move.

Seth Rollins challenges John Cena to a title for title match at Summerslam, later defeats Neville in an open challenge for WWE Championship. I’ll never say that a legit injury suffered in the ring is “lucky,” especially when the injured party is the face of a promotion. But WWE basically had a hot angle fall in their laps when Rollins broke Cena’s nose. They now have a built-in babyface revenge angle for this title-for-title match at one of the biggest shows of the year. The Brooklyn crowd would have been hot for this match already, as it’s John Cena wrestling for the title. But this gives them something nice and personal to fight over.

As for the match with Neville, as thrilling as it was to watch from a physicality standpoint, this match didn’t do as much for me as one of the Cena open challenge segments. The best thing about those matches is there’s a legit chance of one of the midcarders beating Cena, because they’re wrestling for a midcard championship. There’s actually a chance the belt can change hands. To put it bluntly, did anyone actually believe Neville was going to win the WWE Heavyweight Title? Hell no.

Neville’s been around for awhile now. But the sad thing about him is I really don’t see any reason to emotionally invest in him, outside of the fact that he’s a thrilling high flyer. Yes, he’s fun to watch. But who is this guy?

Brock Lesnar and Paul Heyman return to Raw. “The match too big for Wrestlemania.” That was the line that hit home for me on this one. They should put that one on the poster. Also, Heyman might have been the only person in history to refer to The Undertaker as a “submissive little bitch.”

I’m curious how much money Brock got to toss those steps in the ring and stand on them. I’m guessing it’s more than most of us will make in several years.

Roman Reigns, Dean Ambrose, and Randy Orton def. Bray Wyatt, Luke Harper, and Sheamus. The big buzzworthy thing about this match was that it was 2/3 of a Shield vs. Wyatt Family match. But Randy Orton and Sheamus were thrown in those third spots. I’ve honestly forgotten why Randy Orton and Sheamus are feuding. They keep saying they don’t like each other. But this program still has no fire to it. It sure as hell isn’t worthy of being put in a main event.

So it seems we are indeed getting Reigns & Ambrose against Wyatt and Harper at Summerslam. That’s fine, I guess. Why they aren’t adding Sting to the mix is anybody’s guess. They obviously want to give this year’s show a Wrestlemania-like feel. And Sting is apparently just sitting there waiting for them to give him something to do. What exactly are they waiting on? 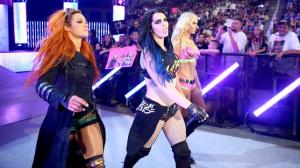 Charlotte & Becky Lynch def. The Bella Twins. Oddly enough, what I liked about this match was that Byron Saxton attempted to do what Mike Tenay used to do early in his WCW career. He would join the announcers during a match that featured luchadores, and provide some background info on the competitors. For however long Saxton is on Raw, he should be doing this with the NXT call ups. Not just with the girls, but with Neville, Kevin Owens, the Lucha Dragons, Bo Dallas, etc. This is a chance for Saxton to prove his naysayers wrong and actually serve a purpose at the announce position.

Cesaro and Kevin Owens join Miz TV. This segment came off very scripted. But I think having Miz out there was a good thing for Owens and Cesaro. As hot as he is right now, Cesaro’s verbal skills still aren’t what WWE wants them to be. It was good to have Miz out there as a safety net of sorts. I’m definitely excited to see these two wrestle at Summerslam. Let ’em fight!