It’s tough not to feel sorry for Hulk Hogan at this point.

We’re several days removed from a piece of the verbal transcript from Hulk Hogan’s sex tape, of all things, being released. I won’t put it up here, but it’s filled with the N-word, in the context of men his daughter Brooke might have been dating at the time. Subsequently, the media has been all over Hogan, and he has been released from his WWE contract.

Needless to say, that kind of racist language in 2015 is unacceptable in any context. I can’t say I feel sorry for Hogan in that respect.

Where my sympathy comes in is the way fame, and ultimately greed, have destroyed the real-life Terry Bollea and his family. In the past 10 years we’ve seen this man divorced and dragged through the mud by his wife of over two decades, stuck in the center of the infamous scandal involving his son Nick and the Graziano family, exposed via the release of a sex tape, and now this.

One of the truly sad things about all this is that on the surface, Hogan seemed to have finally arrived at a secure, content place in his life. He’d settled into an ambassador role with WWE, and had developed a public persona that was perhaps more dignified, as he worked with organizations like Susan G. Komen for the Cure, and made rare television appearances for WWE.

In the end, I can only hope that Terry Bollea doesn’t truly hold this kind of racial hatred in his heart. If he does, than he’s truly someone to be pitied. Some things are worth more than one’s professional life or public image…

Undertaker and Brock Lesnar absent from Raw. Not a big surprise that neither man was on TV this week. Last week was so good that it’d be a shame to water it down with too many appearances by these guys. For my money, we were actually getting to a point where Brock was on TV too much. Nothing tarnishes a “special attraction” like too much TV time. 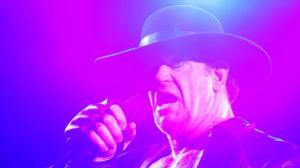 Some fans have been lamenting WWE bringing in Undertaker to sell Summerslam, while they cut the legs out from under talents like Cesaro and Kevin Owens. That’s a fair point, to be certain. But does anybody actually doubt that Lesnar vs. Undertaker will attract more fans than say, Lesnar vs. Seth Rollins? If I’m a WWE guy (or girl), I’m taking advantage of those additional eyes on Summerslam, and doing everything I can to stand out from the pack. I won’t deny that the talent pool might be getting a bad hand here, especially considering Lesnar is also a part-time guy. But what other choice do they have at this point than to simply do their best?

WWE announces Summerslam will be four hours long. I’m in favor of this, so long as they use the extra time well. Either give the midcard some extra time to show off, or give some pay per view matches to talents that might not normally get it (See Stardust and Neville below.). As we see with Raw every week, more time isn’t always a good thing. I it gives the show a little more room to breathe, it could work out for the better.

John Cena def. Seth Rollins, Cena suffers broken nose during match. Um, ouch. Hey, on the bright side, nothing adds drama to a match like a little blood. And to his credit, Cena took a moment or two to get his bearings, but then got right back into the swing of things. The guy’s a champion, like him or not.

As for the booking of the match, I never understand why they do this kind of thing. The idea is obviously to have Rollins go against Cena at Summerslam. So why put them against each other on free TV? Granted, they’ve wrestled a bunch of times on Raw in the past. But it’s been quite awhile. Why remind the audience they’ll be paying for something they could easily get on Raw?

Sasha Banks def. Paige. Charlotte & Becky Lynch def. The Bella Twins. I’ll say this for the so-called “Divas Revolution,” it has me interested in the women’s segments for the first time in quite awhile. We saw some really nice wrestling from Paige and Sasha Banks in particular tonight. If they ever decided to put two girls in the main event of Raw again, this match could be a great candidate.

To their credit, all these ladies look like they’re trying to make the most of this added emphasis. Naturally, some of them are a bit better equipped for that than others (Read: Paige and the NXT girls.)…

Bray Wyatt officially welcomes Luke Harper back into The Wyatt Family. Like a lot of Bray Wyatt’s promos, this one went on a little too long. Particularly when he started talking about his “pet.” But once he gave the mic to Harper, the segment regained some of its life. Ironically, giving Harper a little bit of Bray’s spotlight is what they should have done before he was set free.

At this point, it looks like we’re headed toward a straight up tag team match at Summerslam. pitting Roman Reigns and Dean Ambrose against The Wyatt Family. If they are going to make it a six-man involving Sting, we’ll need to see a new Wyatt Family member added sooner rather than later. Bo Dallas, the real-life brother of Wyatt, seems like the obvious choice. It’s not like he’s doing a lot these days…

Dean Ambrose takes a beating from The Big Show. I liked the underdog chemistry Ambrose had with Show here. If the plan is to add him to the Intercontinental Title picture, I certainly won’t complain. Adding Ambrose to just about anything guarantees a little bit of added fuel to the fire. Good thing, too. The flame on this Ryback/Big Show/Miz was fizzling out quickly.

Neville def. Fandango, Stardust cuts a promo on him. The hero/villain angle between Neville and Stardust could be mildly compelling, I suppose. But was anybody else frustrated with Stardust’s promo? I couldn’t hear half of it because he kept speaking in that hushed tone. C’mon, Cody! You might be working toward a Summerslam match, here! Speak up! 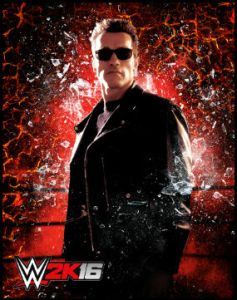 Arnold Schwarzenegger’s Terminator character revealed as pre-order bonus for WWE 2K16 video game. Let’s just hope they don’t add the Wrestlemania XXXI version of Triple H as Terminator. You remember, right? That was the robot that, for whatever reason, was booked to go over Sting. Hell, even Robocop didn’t do that. And that was in WCW!

Stone Cold Steve Austin to interview Paige on the next “Stone Cold Podcast.” Paige is an odd choice for this spot. There are a lot of much better candidates. Just a few off the top of my head: Roman Reigns, Seth Rollins, Daniel Bryan, Kevin Owens, Cesaro, or even Nikki Bella. How is Austin interviewing Paige going to attract new network subscribers? Where’s the intrigue? It  seems like a waste of a perfectly good network special to me.

Image 1 from bleacherreport.com. Other images from WWE.com.

One thought on “Hulk Hogan’s Racist Rant, and Other Ponderings From WWE Raw”