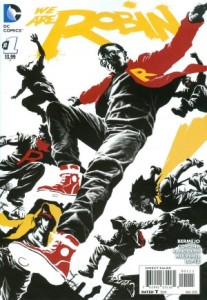 I must be getting slower in my old age. It took me a little extra time to realize that Duke Thomas was the kid Batman said “You dropped your fish” to in Zero Year. (As I recall, he may have done a little more than that.) But the fact that we’ve now followed this kid from that story, through Endgame, and now to We Are Robin, is pretty cool.

That being said, the debut of We Are Robin would have been great with or without an established main character. It’s the kind of street-level Gotham City book that should always have a place on the stands. I found myself having happy flashbacks to Gotham Central while reading this issue. While the two books are different in almost every way, We Are Robin strikes me as the kind of story that will, like Gotham Central, help us get better acquainted with the city and those who live there. It’s tough to argue appeal that has.

We Are Robin stars Duke Thomas, an inner city kid whose parents were infected by the Joker virus released during Endgame. Subsequently, they’ve disappeared, and Duke has become obsessed with finding them. As we see early in the issue, his quest has a penchant for getting him into trouble. Luckily, he’s about to get some help. It’s unexpected, and most certainly unconventional. But through these new allies, Duke may become part of something bigger than he ever thought possible.

I’m always partial to books with a good lead, or opening line. We Are Robin #1 has one of the best leads I’ve read in awhile…

“Someone told me that the problem with youth is the inability to accept your own mortality. I wouldn’t consider this one of my problems.”

I feel like this should have been the opener for a teenage superhero book a long time ago. We’ve certainly had no shortage of dead kids in our escapist picture books over the years. And of course, it’s a great introduction to the Duke Thomas character, who comes off pretty likeable here. He’s intelligent, witty, virtuous, and isn’t short on moves. It’s just a shame his history is tied up in something as…irritating, as Zero Year.

The appearance of Leslie Thompkins in a counselor role for Duke is encouraging as far as future issues are concerned. Leslie has largely fallen by the wayside in recent years, especially since the New 52 started. A street-level book like this is tailor-made for her, and will hopefully flesh out her role a bit more.

The issue has a more cartoony, animated feel than you might expect from a book like this, especially given the Bermejo cover. But given what I can only assume will be the youthfully exuberant tone of this book, I expect it’s a justified approach. Obviously we’ll know more once issue #2 hits the stands. My only real complaint regarding the art here is a panel we see early on, where Duke is throwing a kick with a leg that looks a little too stretchy. Maybe he’s been drinking Gingold? (Look it up, noobs.)

We Are Robin #1 is encouraging. From a marketing standpoint, it’s got a lot of what DC is looking for right now. A youth focus, much like the revamped Batgirl, as well as Gotham Academy. We’ve also got a non-white lead to help fill the diversity quota. But more importantly, this book feels compelling and fun. For so long, DC seemed to forget that comics are, ideally, supposed to be fun. Thankfully, that little factoid seems to be a priority for them again.

Image 1 from washingtonpost.com. Image 2 from comicvine.com.

4 thoughts on “A We Are Robin #1 Review – Remember When He Dropped His Fish?”