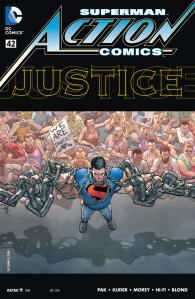 Superman vs. The Cops. Yeesh. Well, it’s timely. You can’t fault them for not being relevant…

Indeed, in the year that the town of Ferguson became synonymous with racial prejudice and police brutality, and headlines continue to pop up about cops going too far, Superman finds himself standing between the police and innocent people. While I’m still not a big fan of the de-powered “Tough Guy Superman” approach, this is very much in line with what a Superman comic should be. The Man of Steel taking on issues that effect real people.

As Superman, whose identity has been exposed to the world, battles a monster made of “solidified shadow,” the Metropolis police descend on the citizens assembled in “Kentville.” Now the question is, can Superman protect these people? And what will he have to do to accomplish that? 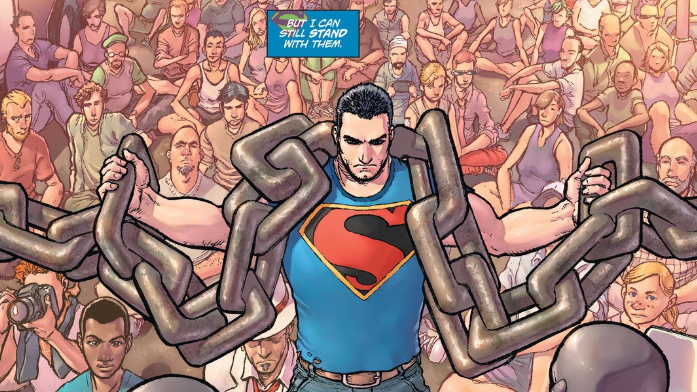 Greg Pak and Aaron Kuder return Superman to his roots here as a champion for the oppressed and defenseless. As we see police in riot gear attempt to tear gas civilians, our hero is set up in a somewhat contrived, yet visually arresting scenario. He wraps himself in a giant chain and creates a barrier between the police and the citizens. He then takes repeated shots to the face from gimmicked up S.W.A.T. team guys. It’s hokey, but it creates the sense of drama and sacrifice they’re going for. And of course, the chain harkens back to the tried-and-true image of Superman snapping the chains off his body.

To be fair, the police aren’t completely demonized here. We see reluctance among the cops, and some of them acknowledge how Superman has saved them in the past. But the bad apples spoil the bunch. We also see the civilians debating whether they should fight back, so the hostility isn’t entirely one-sided. But it’s fairly obvious what this issue is meant to be. The police are the bad guys. One can definitely argue whether this is in good taste, but I think much depends on how the in-story conflict is resolved. We end on a rather dramatic image, so we’ll obviously be seeing more of this next month. 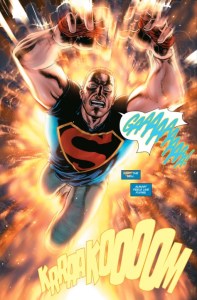 As far as Clark Kent himself is concerned, the man we see here is more likeable than the one we saw last issue. While issue #41 saw him using mild profanity, and at one point talking like he was in a gritty noir comic, he feels more like Clark here. He still has more of a cynical edge to him. But he doesn’t feel as darkened here. At one point they actually have him hogtie the big monster he’s fighting, i.e. “farm boy.” That’s a little on the nose, but I prefer that to what we saw last issue. Action Comics #41 felt like we were reading the exploits of a different character. This issue feels like a Superman comic. That’s a very welcome change. If it’s not Superman, this whole Truth thing doesn’t even matter, does it?

Pak and Kuder will have me back for next month. For my money, culturally relevant Superman beats sci-fi monster battling Superman any day. Tough Guy Superman? That’s another story. But the intrigue of how they’ll follow this issue is too much to resist.

Image 1 from nothingbutcomics.net. Image 2 from kotaku.com.