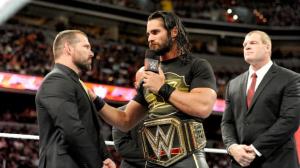 Raw has been extremely frustrating in recent weeks. More frustrating than I can ever remember it being in the nearly 20 years I’ve been watching. It’s becoming tough to get through, even the help of a DVR. Even Brock Lesnar and Paul Heyman haven’t been able to up my enthusiasm.

It’s not one specific thing that irks me right now. I’m sure if you talk to a lot of fans, they’d tell you a lot of the same things…

– The show is too damn long. Everything is so stretched and prolonged for the sake of time that it actually becomes boring.

– We don’t need a 20-minute monologue at the start of every show to get us invested. We’re already invested. We’re watching the show! And the casual fans that are tuning in at the top of the show are likely so bored by the long-winded promos and bad acting that they’re changing the channel anyway.

– The Authority storyline has gone on too long. The whole “evil authority figure” story has been old hat since Vince McMahon himself perfected it in the late ’90s. Before the Attitude Era, we didn’t need an evil boss to drive the show forward. We just let the stories unfold. Why can”t we do that now?

– I hate to be this way, because I have no desire to see anyone out of a job. But this show desperately needs new faces. Big Show, Kane, Randy Orton, The Bella Twins, etc. These guys are all treading water. I imagine part of the reason NXT is so hot right now is because there are so many talents down there that fans haven’t seen before. Meanwhile, on the flagship show they’re still seeing certain talents that have been around for nearly two decades! We desperately need to mix things up.

Like the last several episodes, this week’s Raw was largely forgettable, and tough to get through. There were, however, a few bright spots. I’ll happily talk about them here. 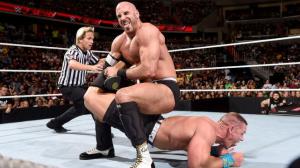 John Cena and Cesaro steal the show in US Title open challenge match. Cena and Cesaro have always had great chemistry. They’ve had some awesome matches, and while this wasn’t their best outing, it was definitely a breath of fresh air. I was pleasantly surprised to see Cena diversify his arsenal here. Mind you, that springboard stunner still looks like crap. But at least he’s trying. And in this match he definitely succeeded.

It’s tough to believe that in 2015, we’re saying a John Cena program is the creative highlight of a Raw. But these US Title open challenges, along with the story he’s telling with Kevin Owens have made him one of Raw’s MVPs in recent weeks.

As for Cesaro, this poor guy just can’t catch a break. Whether it’s the Wrestlemania battle royal last year, or being a tag team champion this year, the guy is becoming the poster boy for start-and-stop pushes. But if tonight proved anything, it’s that Cesaro deserves to play a prominent role on WWE television.

In his promo this week, Wyatt kept emphasizing: “Anyone but you, Roman.” That’s interesting, as that’s essentially the attitude the fans had toward Reigns at the Royal Rumble. I’m curious to see if Wyatt acknowledges that, and if so, how Reigns responds. It doesn’t look like they’re going the “family man” route anymore. That’s fine, so long as they know where they are going with this angle…

Sheamus def. Neville. I was as disappointed with Sheamus winning the Money in the Bank briefcase as a lot of people were. But he does have pretty good matches. I don’t have high hopes as far as how things will be if/when Sheamus cashes in and wins. But at least it’ll be something different.

As for Neville, he’s usually fun to watch. I’m not really a fan of when he does those back flips in the ring for no real reason. But he’s starting to carve out a little niche for himself on the roster.

And that’s it. From a three hour show, I was able to list just three things I found appealing. Keep in mind, I’m usually a pretty optimistic wrestling fan. But right now, the show is just not good. Here’s hoping the build for Summerslam reinvigorates things.

One thought on “John Cena and Cesaro Steal the Show, and Other Ponderings From WWE Raw”