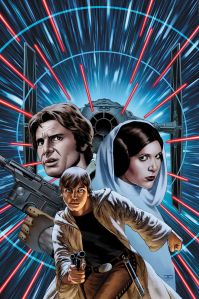 Need to catch up? Check out Star Wars #4.

“I’m never coming back to this planet again.”

Luke said that about Tatooine in the original Star Wars movie, of course. But it turns out you can go home again, and not just to rescue your buddy from Jabba the Hutt. Sometimes you’re looking for answers.

Star Wars #5 brings Luke Skywalker back to Tatooine, hoping to find clues on which path to take next. But our hero is gravely unaware that Darth Vader has sent one of the galaxy’s most notorious bounty hunters after the young pilot that destroyed the Death Star. Boba Fett is on Tatooine, and he’s coming for Luke. 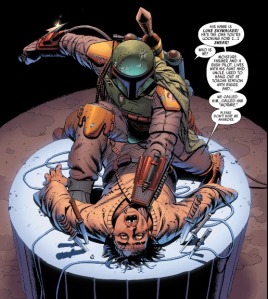 I’ve been pretty critical of Jason Aaron’s work on this series. But in this issue he writes an absolutely bad ass Boba Fett. We find him in the iconic Mos Eisley Cantina looking for leads. When he finds a teen with answers, we see something that rings very true to the Boba Fett character: A capture and interrogation sequence. This man is a ruthless, stone cold killer, and Aaron and Cassaday are able to illustrate that to great satisfaction. They give the sequence more of an edge than we usually see in a Star Wars story. Yet it still feels like the universe we know and love, especially when Fett finishes with him…

This issue is actually a reminder of how sucky it was when they redid Fett’s voice for the Empire Strikes Back DVD. Jason Wingreen had a gravelly, malice-filled, Clint Eastwood-type voice that was perfect for the character. Temuera Morrison had an accent. That’s about it.

I’ve also come to respect the way Aaron writes Luke Skywalker. In this issue, as well as the previous one, Aaron has captured the spirit of that young man who met Yoda in Empire. He’s impatient, impulsive, reckless, and as we saw last issue, immensely frustrated at times. But we still see traces of a great hero and a brave leader. As such, Luke is pretty easy to root for here.

That’s not to say we’ve seen a 180 in Aaron’s writing. This issue also sees Han Solo and Princess Leia scout locations for a new Rebel base using a stolen Imperial shuttle, much like the way they used one in Return of the Jedi. We even get some familiar talk about clearance codes and what not. But that’s not the problem. Aaron gives us some of the angry flirting between Han and Leia that, again, serves as a precursor to Empire. A Han and Leia get into some deep doo doo, as they’re prone to doing, we get the following dialogue…

Leia: “I can’t believe I’m going to die here with you. You are without a doubt the worst smuggler I’ve ever met.”

Han: “Frankly lady, you aren’t much of a Princess.”

Han then kicks over Leia’s sandcastle, prompting her to plop down and cry.

I’m a fan of Han and Leia being next to each other in this series, but the dynamic in their whole love/hate relationship shouldn’t be this stripped down. That’s part of the fun of the whole thing! They dance around it, and then when they finally get close to it, something happens to spoil the moment. C’mon, Jason. Let’s not turn science fantasy’s greatest romance into an episode of Rugrats.

This is the penultimate issue of John Cassaday’s run on Star Wars, which is a shame. This hasn’t been his best work, but he’s given us some memorable stuff. Not the least of which was the awesome pin up from last issue (shown left). Naturally, as the issues have gone on he seems to have found his groove in the Star Wars universe. He’s able to tap into the classic Star Wars characterizations strictly with his art. Case in point, the way he plays with Han Solo’s acting here (shown above). Boba Fett’s body language is also perfectly on point. There are also some little things, like the texture he gives to the robes Luke and the sand people are wearing, and the cracks on the outside of Obi-Wan’s hut. It all lends itself well to the “used universe” concept George Lucas was going for in that first movie.

I’ll be sticking with Star Wars through issue #7 at least, just to see what new penciller Stuart Immonen brings to the table. This series started off on a sour note, but it’s gradually been picking up in quality. I maintain what I’ve said previously, however. If you’re looking for great Star Wars comics, Darth Vader is the place to be.

Images 1 and 2 from author’s collection. Image 3 from comicvine.com.

One thought on “A Star Wars #5 Review – The Jedi Bounty”