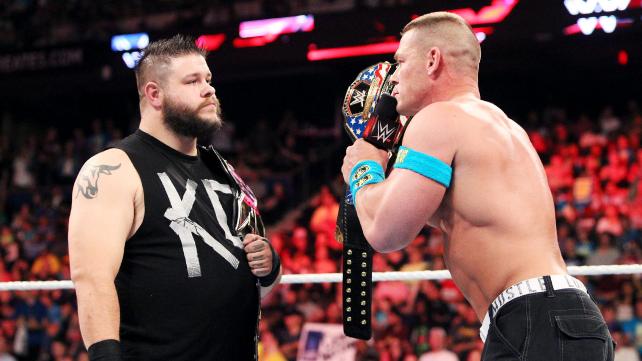 Kevin Owens makes his first WWE TV appearance, accepting John Cena’s open challenge. Owens will face Cena at Elimination Chamber. Yet again, the John Cena open challenge segment steals the show. That’s an emphatic statement, not only about the talent Cena’s in the ring with, but Cena himself.

Obviously this segment served two purposes. It was a great promo for NXT Takeover this Wednesday, and it introduced mainstream audiences to Kevin Owens. Full disclosure: I haven’t seen as much of the real-life Kevin Steen’s work as I’d like. But his prize-fighter presentation is great, and he’s obviously got the brash attitude thing down pat. He’s also got a hell of a wit on him. Was he supposed to say he’s been wrestling longer than Cena? If that was off the cuff, then I commend him for his guts.

The really cool thing about that final image of Owens standing on the US Title, and hoisting the NXT Title in the air, is that it meant something. Symbolically, they got what they were looking for. Had that been, say, Kofi Kingston in there during one of his runs with the belt, the image would have fallen flat, and actually hurt the credibility of the US Title. But now that Cena has been having these great matches with it week after week, what Owens did had actual heat to it. It was great build up to what is apparently going to be a match at Elimination Chamber.

It’s surreal that these two are having a match so quickly. But I can’t deny that it’s a must-see, and a great draw for those on the fence about the WWE Network. I’m hoping for a fight, and I’m guissing I won’t be disappointed.

Rusev banishes Lana from his side after she surrenders for him at Payback, later aligns herself with Dolph Ziggler. Rusev has now lost to John Cena on three straight pay per views. But creative seemed to be trying to protect him. They had him render Cena unconscious, which would have given him a win in a traditional submission match.

But nevertheless, Rusev is no longer the unstoppable brute he was when 2015 began. And now, they’ve taken away his mouthpiece. I’m still not convinced breaking them up is the right move. In the long run, WWE may have hurt Rusev.

As for what happened between Lana and Dolph Ziggler, I’m curious about what their intentions are. Are they trying to push Ziggler to greater heights by pairing him with the very popular Lana? Or was he put with her because they know he can have great matches with Rusev, and perhaps re-establish him as a monster?

There is, of course, the chance that Lana could end up heeling on Ziggler, and going back to Rusev. I’d be okay with that, but what does that do for Doph? Out of the three parties involved here, I’m most concerned about Dolph, and what this means for his immediate future.

Dean Ambrose granted a WWE Championship match against Seth Rollins at Elimination Chamber. Awesome. Any time these guys get in the ring, it’s magic. Let them main event another pay per view, and let Ambrose continue to prove his worth as a main event-level star.

Participants announced for Intercontinental Title and Tag Team Title Elimination Chamber matches. I’m thinking Cesaro & Tyson Kidd will take the tag straps back here. However, I’d love to see the Prime Time Players win it. You’d think from a sheer marketing standpoint, having Titus O’Neil wear gold after winning his Celebrity Dad of the Year award would be a good move. But when you boil it all down, I just find O’Neil and Darren Young really entertaining, and would love to see them get larger roles on television.

As for the Intercontinental Title, Sheamus is the smart bet, whether he looks stupid or not.

Ryback impresses against Bray Wyatt and Sheamus. I was pleasantly surprised with the Ryback/Bray Wyatt match at Payback. Wyatt using his weight against the midsection of the much larger, more muscled Ryback was a good story to tell, and was ultimately a convincing way for him to go over. Ryback also sold it really well, which makes me think he’s been listening to The Steve Austin Show and The Ross Report. Austin and JR have stressed the importance of selling time and time again recent weeks.

“The Big Guy” also had a strong outing on Raw. I was surprised he cut Stephanie McMahon off on the mic. I’d be curious to know whether that was scripted or not. He then got to show off his strength against Sheamus, catching him with a powerbomb, and gorilla pressing him on to the announce table. Despite losing in both outings, he definitely came out looking like a winner. I don’t expect him to come out of Elimination Chamber with the IC Title. But for my money, his stock is rising.

Neville does an in-ring interview with Renee Young, and gets interrupted and attacked by Bo Dallas. Not bad. Pretty standard babyface stuff. Incidentally, was Renee Young still supposed to be in the ring when Neville asked her about his NXT Championship reign? That was the only problem I had with that portion of the show.

I like that they’re actually doing something with Bo Dallas. In all honesty, the only things I can remember about his WWE run thus far are his first loss to R-Truth, and when he got beat up by Sting. He’s got a decent character. It just seems like they can’t come up with anything solid for him to do. Putting him with Neville, an opponent he’s fairly familiar with from NXT, is a good way to at least get him some screen time.

Roman Reigns is kept off Raw, advertised for Smackdown. I liked this. Reigns wasn’t shoehorned into anything, and it gave them something worthwhile to put on Smackdown. I’m still wondering when we’re going to get a one-on-one match between Reigns and Seth Rollins on pay per view.