This is WWE’s third annual Payback event. At the risk of sounding overly pessimistic, it’s one of the company’s least important pay per views of the year. It’s probably right behind Battleground in that sense. You’ve got to think pretty hard to remember any noteworthy stuff that has happened at Payback. There are, however, at least two…

– The match between Alberto Del Rio and Dolph Ziggler from 2013, which ended in a double-turn.

– Last year’s six-man match between The Shield and Evolution.

I’m not expecting much in terms of long-term memories from this show. But who knows? That tag team match does look promising. And we’ll probably see the end of Rusev’s run as an upper card heel.

Well, they went to the trouble of putting Axel and Sandow together. They may as well let them have a win.

I want to like this whole Mega Powers parody thing. But I’m stumped as to how Sandow and Axel can get it to translate to upward momentum. Yes, it’s great the company is actually doing something with these guys. But the problem with being a comedy act is that if you do it for too long, you get pigeonholed into that kind of role (a la Santino Marella). If there’s anybody that doesn’t deserve that, it’s Damien Sandow. But I suppose in order to achieve greatness, you’ve got to stay in the limelight. And this weird new gimmick has indeed kept Sandow in the limelight. So here’s to the new Mega Powers…or perhaps the Super Mega Powers? The Ultra Powers? The Super Mega Ultra Powers?

I like the pairing of Naomi & Tamina. Tamina is good in the bodyguard role, and it’s cool that they’re playing up the familial connection between the two. That being said, UGH, another pay per view match with the Bellas. Hopefully this one is quick and painless.

I see the Bellas picking up a win here, but Naomi and Tamina attacking them after the match to keep the rivalry going. Eventually, we will indeed see another title match between Naomi and Nikki. Hopefully at that point they’ll switch the title, and they can put Naomi in a program with Paige, or another lady that’s a bit more likeable than Nikki. 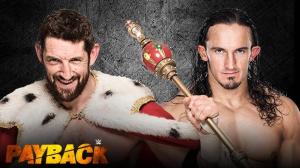 Neville has illustrated lately how a wrestler can still find victory in defeat. He’s lost matches to Barrett, John Cena, and Dolph Ziggler. But his performances have always been memorable, and left the crowd wanting more.

This time, however, he’s due for a win. My guess is both of these men will be involved in the Elimination Chamber show later this month in the big match for the Intercontinental Title. If I had to guess, I’d say King Barrett will be walking out of that match with the title. This would, of course, lead to the stakes being raised between Neville and Barrett via a title match. So while Barrett will end up with the gold eventually, Neville will get his hand raised at Payback.

I’m curious as to why they didn’t up the stakes with another stipulation in this match. This feels like a downgrade from Extreme Rules. Still, a rematch was the right move, given what happened to Ziggler.

As I’ve mentioned previously, WWE is in need of upper midcard heels right now. Sheamus fits the bill perfectly. He’s an established star who’s found new life as a bad guy in recent months. If they’re looking for guys to put against Dean Ambrose, Roman Reigns, Randy Orton, or John Cena, he should be first in line. However, after what happened last month with he and Ziggler, Sheamus should get his comeuppance here. Let’s say Sheamus gets the win, then Ziggler attacks and forces him to kiss his “arse.” Turnabout is fair play, after all. 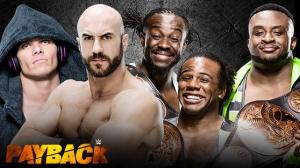 It’s amazing what a heel turn can do. Whether this heel turn was planned from the get-go or not, The New Day have now become one of the hottest heel acts in the company. What’s more, they’re a hot heel act that can put on great matches, as we saw at Extreme Rules. A Two-Out-of-Three Falls match should do nothing to hinder them in that respect.

The tag belts are supposedly going to be up for grabs at Elimination Chamber. If WWE wants to switch the titles to a babyface team like Cesaro & Kidd, I imagine it will be there. So it’s another win for The New Day at Payback. And why not? I’d say they earned it for making this crappy gimmick work.

I imagine this match was booked as a way to give Bray his mojo back after the Wrestlemania loss to The Undertaker. He’s got to beat someone, after all. Ryback’s as good a choice as anyone.

This is also Ryback’s first big pay per view match in awhile. This whole angle might have been a test to see how willing fans are to get behind him against a major heel like Bray. If that’s the case, I’d say he’s done alright. Not great, but alright. Ryback still has a lot of people to win over. Regardless, he won’t be winning this match.

An “I Quit” match against the guy who never gives up. There’s a tough assignment if there ever was one.

I imagine the big story in this match will be Lana. Does she stay with Rusev or doesn’t she? As much as the “smart” fans all want to see her stay with him, it looks like they are indeed going to go ahead with a babyface turn. And what better time than what will likely be his last PPV match with John Cena. Indeed, it looks like Cena will still be the man to beat after Payback.

The question is: What happens to Rusev after Payback? If he taps out here, he’ll have lost to Cena on three consecutive pay per views. Ouch. There’s certainly no shame in losing to the biggest star in the company. But so much for this guy being an unbeatable brute, huh? I’ll be very curious to see what happens to Rusev the following night on Raw.

The writer in me doesn’t like that Roman Reigns is in this match. I certainly wasn’t for putting him with Big Show again. But a one-on-one match between Reigns and Rollins for the WWE Championship should be something WWE is planting seeds for now, regardless of when it actually takes place. From a storyline perspective, Rollins humiliated Reigns at Wrestlemania in front of his family and the entire world. That’s a hell of a backstory for a babyface redemption rematch. So why he’s being stuffed into this multi-man match is a mystery to me.

Supposedly, Dean Ambrose was added to this bout so that he could be pinned for the finish, and Orton and Reigns could stay strong. As happy as I am to have Ambrose here, I don’t think he was needed for that purpose. Randy Orton is a made man in WWE. A loss to a heel, particularly a vile, cheating heel like Rollins, isn’t going to hurt him. One thing that might hurt, however, is taking a triple power bomb from Rollins, Ambrose, and Reigns. You know they’re going to bust that old Shield favorite out. WWE might even be testing the waters here for a Rollins/Reigns/Ambrose match at a big pay per view down the line.

In any event, Rollins goes over here. He’s got a lot left to do as champion. I imagine next on his to-do list is a match with Kane…

One thought on “A WWE Payback Preview – Make Me Care!”