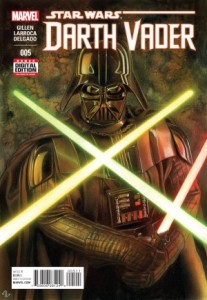 Darth Vader continues to be immensely better than any of Marvel’s other Star Wars titles. Trust me, folks. It’s not even close. Why? Oh, let me count the ways…

It captures its main character perfectly. It sprinkles in just enough prequel material to display Vader’s depth, but not turn die-hards off. It has added new characters that add both intrigue and humor. It’s also beautifully drawn, and does enough artistic justice to the classic Star Wars visuals that when it adds something new (For instance: A secret base on top of what can only be called “space whales.”), it’s that much easier to buy it as a part of this iconic universe.

In this issue, Kieron Gillen and Salvador Larroca bring Vader, Doctor Aphra, Triple-Zero, and BT to a secret base in the Outer Rim, which supposedly houses those the Emperor has deemed worthy of replacing him. But the dark lord isn’t quite prepared for what he finds. In his own words: “This is…blasphemous.” 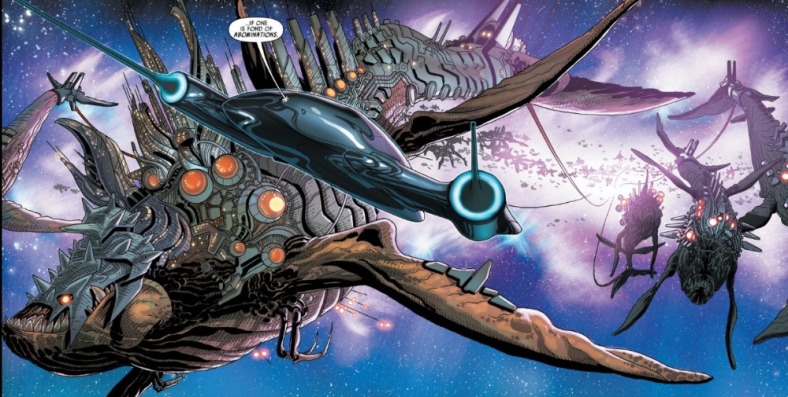 Oddly enough, Gillen and Larroca play with some visuals from The Phantom Menace here. We see Vader carving his way through a thick door, as various armed soldiers stand by. We then have Triple-Zero, a silver protocol droid just like the one we saw in Episode I, emerging from the resulting smoke. But then we’re hit with a swerve that’s nothing like what we saw in the movie. This is a team that’s great with playing with fan expectations, giving you what you want, but not necessarily the way you thought you’d get it…

On the subject of visuals, that two-page shot of the space-whales is amazing. It’s like nothing we’ve ever seen in a Star Wars movie, but it feels very true to the cruel spirit of the Empire. Vader calls them an abomination. But the ironic thing is, he’s something of an abomination himself. That’s not necessarily a connection everyone will get, but it’s there. 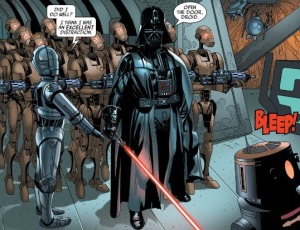 I mentioned this last time, but Triple-Zero is a riot. The sheer notion of an “evil butler” type is hysterical. But when you put him amid the chaos of the Star Wars universe, next to a no-nonsense-type like Vader, the ensuing comedy feels very organic.

I’ll try and stay spoiler-free here. But what Vader finds on the base is, at face value, very compelling. Gillen seems to be playing with the notion of the Jedi and Sith being an “ancient religion,” which was introduced in A New Hope. At one point, someone even says: “The Force is obsolete.” This is made all the more interesting when you consider this base is sanctioned by Palpatine, a Sith himself. From an in-story perspective, I question Palpatine’s motivations here. Is he truly preparing for a world without The Force? Or is this part of a larger scheme? I’m inclined to think the latter. 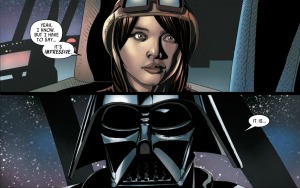 We don’t get a lot of time with Doctor Aphra in this issue. But what we do get is enough to keep me invested in her. Tragedy follows Darth Vader wherever he goes. And there’s little doubt that tragedy is what lays ahead for this woman. It’s simply a question of how, where, and when.

But that’s simply one of many elements that makes this series a must-read for Star Wars fans.

Images 1 and 2 from author’s collection. Image 3 from jedi-bibliothek.de.