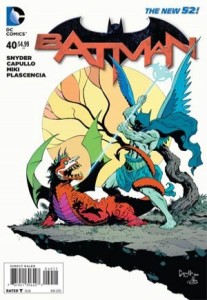 ***WARNING: Spoilers ahead for Batman #40 and the Endgame storyline.***

I’m not as big a fan of the Scott Snyder/Greg Capullo Batman run as a lot of comic book readers. But no one can deny they’ve got big, ballsy ideas. The Court of Owls, Flappy Face Joker, Zero Year, etc. For better or worse, they’re willing to take risks.

Hell, the finale to their Endgame story was so big and ballsy neither Batman or The Joker survived it.

When we open Batman #40, The Dark Knight and his surrogate family have teamed up with the likes of The Penguin, Killer Croc, Bane, and other foes to fight back against The Joker and his deadly virus that has turned most of Gotham into sadistic laughing zombies. But in the end, it all comes down to Batman and The Joker, in a fight that will irrevocably change Gotham City forever…Or not. Maybe they’ll be back in three months. This is a mainstream superhero comic, right?

While I am fairly critical of the run Snyder and Capullo have had since the New 52 reboot, it’s tough to deny the quality of Capullo’s work. His art has a visceral quality that often sticks with you for awhile. That’s very much on display in the brutal and bloody fight we see hero and villain engage in here. It’s very reminiscent of Frank Miller’s work in The Dark Knight Returns, to which Snyder and Capullo have paid tribute time and time again during their run. Interestingly enough, the Returns fight ended with the Joker having a Batarang in his eye, and the Endgame fight it’s Batman with a playing card in the eye.

The sheer ugliness of the fight was unexpected. But it does fit the idea of The Joker finally taking the gloves off and coming after his “former friend” with everything he’s got. In terms of Mr. J, Capullo does a fantastic job bringing him across the emotional spectrum. From sheer joy, to rage, to desperation. The character is rendered with such bulbous yellow eyes and these shark-like rows of gigantic teeth. This is why Capullo is one of the defining Batman artists of the last decade.

The issue revolves around Batman trying to extract a chemical called dionesium from The Joker’s spine. Dionesium is among the substances that has allowed characters like Vandal Savage and Ra’s al Ghul to live as long as they have. The idea is that after Death of the Family, Joker found a large pool of it in the caves under Gotham, which healed him and restored his face. As a plot point, this is fine. The man cut his own face off. There was obviously going to be some kind of magic comic book cure for him. What I don’t like is the way Endgame makes a mystery out of whether The Joker is this mysterious mythical figure called “The Pale Man,” who’s been around for centuries. In earlier issues we see Joker pop up in old photos, which is never entirely explained. And even at the very end, when the idea has been disproven, Batman mocks him for it.

I understand what Snyder is going for here in terms of The Joker’s cause, and the idea that a mere mortal like Batman can’t control the endless, eternal chaos and randomness of our world. But I dislike the notion that Batman and The Joker aren’t equals on the mortal playing field. These two characters both stand for something very powerful, and very human. The fact that they’re both mere men is important, because it plays into the relatability of their ideals. In theory, anyone could be Batman or The Joker, not because they don’t have super powers, but because they’ve both made very real, very human choices about their lives. Making The Joker an immortal character tarnishes a portion of that human element.

Plus, we all knew he wasn’t “The Pale Man” anyway. So why waste time on it in an otherwise intriguing and compelling story?

There’s also a nitpick I can’t resist here: Why is The Penguin involved in street fight (shown left)? If he’s firing off a bunch of trick umbrella gimmicks, that’s one thing. But he appears to just be fighting like everybody else. That’s a little out of his element, isn’t it? Just sayin’…

Flaws notwithstanding, Batman #40 is a nice finale to the Endgame story, which of course takes us into the whole “Robot Suit Batman” thing they’re starting soon (We’ll cross that bridge when we come to it.) We can all make whatever arguments we want about whether it’s a quality issue or not. But for obvious reasons, it’s got historic value.