Business started to pick up for Convergence in this issue. While certain problems remain, and this issue saw a pretty bad consistency error, Convergence does finally manage to give us a decent emotional tether via Earth-2 Dick Grayson.

As worlds continue to collide via Telos’ “perverse tournament,” our heroes from Earth-2 take a stand and fight back. But how does Dick Grayson fit into that plan? And by the end of the issue, our heroes have found a new ally…or have they? 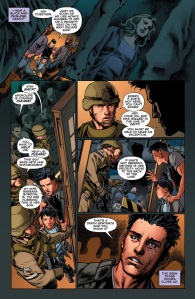 The scene that kicks off Convergence #2 is probably the one we should have gotten when the story began. Via flashback, we see Dick Grayson and his son Tommy desperately trying to get off Earth-2 during Darkseid’s invasion. Dick loses everything, including his wife Barbara Gordon, before being plucked from his world and tossed into the events of Convergence #1. This scene set the stakes of Convergence really well. We see Dick’s desperation to survive, and to see that his son survives. Later in the issue, King and Pagulayan amp things up emotionally by having Dick see the pre-New 52 Gotham version of Barbara. Finally, Convergence gets injected with a sense of epic tragedy and impending doom, as opposed to different versions of characters simply being drawn next to each other.

This issue sees the return of pre-New 52 Batman, which was a big moment for yours truly, as that’s the Batman I grew up with. He’s got his Batman Incorporated costume on, complete with what I call the “Knight Light” on his chest. Unfortunately, as the issue progresses, Pagulayan seems to forget about the light. When we first see Bruce, he has it. Then the light disappears in favor of the more commonly used Bat-insignia. Then it returns for a splash page shot of Bruce standing alone. I can only assume this is a mistake, and a rather obvious one, at that.

We end up watching a conversation between Earth-2 Batman and Knight Light Batman, where the dialogue is kept from the reader. I can only assume the pay off for that is down the line, and will end up being about how Dick Grayson is some kind of savior. It’s frustrating. But hopefully they’ll go somewhere with it.

So at the end, the rest of the Earth-2 heroes rescue a character named Deimos from a bunch of Telos’ drones. I’m not sure if this was supposed to be a big reveal or not. It certainly wasn’t for yours truly. Regrettably, this was one of the few times I had to Wikipedia a character’s name. As one might have gathered by his appearance, he’s a villain. I can’t say I’m overly intrigued by his appearance at this point, but obviously we’re only meeting him now.

Still conspicuous by his absence in Convergence is New 52 Superman, or anyone from the New 52 for that matter. Like the conversation between our Batmen, I can only assume there’s a payoff for that #0 issue coming, especially considering how much Superman imagery we’ve seen in this story. Regardless of what DC is doing behind the scenes (they’re moving their offices to California), seeing them take such a hard break from everything they’re been building since late 2011 is very surreal. The New 52 heroes will indeed join the main series at some point, and their continuity will indeed survive after Convergence. Thus, it’s all the more confusing that we haven’t heard word one from any of them yet, specifically Superman.

Still, Convergence #1 is indeed an improvement over its two predecessors. I now have a reason to care about something in this book. But thus far, Convergence proper is far from worth the cumulative $15 we’ve put down for it.

One thought on “A Convergence #2 Review – The Disappearing Knight Light”