Ready for some cosmic conversation, featuring Superman and pretty much every version of Brainiac that’s ever existed? I know I wasn’t. Come to think of it, I really had no idea what to expect when I picked Convergence #0 up, except for maybe a general prologue for the weekly Convergence event series, which begins next week. We did indeed get a prologue. But didn’t expect this much…dust. And rocks. And sand. And talking. Lots of talking.

Convergence #0 takes place during the Superman: Doomed story arc, as Superman and Brainiac are trapped in a black hole outside of time and space. At this point, Brainiac has seen the scope of the multiverse, and has watched other versions of Superman die numerous times, most notably against Doomsday in The Death of Superman. (“His death would inform your transformation into the Doomsday monster.”) He has thus captured various cities from various timelines across the DC Multiverse, and his holding them captive under various domes. He tells Superman all of this, with the promise that although Superman will forget everything he’s just been shown, he’ll return to Brainiac when the time is right.

At the end they reveal the real villain for Convergence: Telos. We don’t know much about him at this point. But we do see him lowering one of the domes, as he talks about allowing certain cities to return to the universe, and that only the strong will survive. Via an appendix, DC is nice enough to give us an inventory of all Brainiac’s stored cities. No matter how long you’ve been around the DC Universe, chances are there’s something here for you.

As for Convergence #0, there’s some obviously important information here. I just wish they’d thought of a way to get it to us in a more creative way than just Brainiac telling Superman everything. Not to mention a way that didn’t harken back to Superman: Doomed. For readers that opted out of Doomed (*raises hand*), we start this issue in a confusing place. Readers starting here also don’t know why Superman is mysteriously growing a 5 o’clock shadow as the issue progresses. If we’re trying to bring back readers that were turned off by the New 52, or simply haven’t read a DC comic book in awhile, we’re giving them an awkward start. 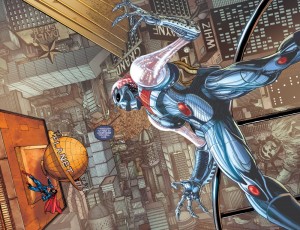 All this being said, Ethan Van Sciver is still an all star. Having him on this issue certainly gives it an epic feel, akin to his work on Green Lantern: Rebirth and The Flash: Rebirth. I can’t complain at all about his renderings of Superman and Brainiac, past and present. And there’s a great two-page spread of Brainiac (one of them, anyway) bending this weird reality to his will, and showing Superman some of the city’s he’s collected. It’s certainly enough to make you wish Van Sciver was sticking around. Sadly, he’s not.

The main Convergence series is still very much worth checking out if you’re interested in where the DCU is heading in 2015. And obviously we’re in for some cool time-bending stories. But from a writing standpoint, this didn’t wet my appetite as much as it wanted to.