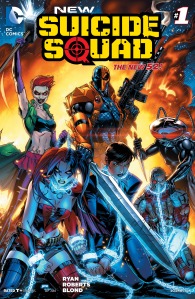 In theory, this New Suicide Squad relaunch is a welcome one. DC has swapped out the likes of Captain Boomerang, King Shark, and James Gordon Jr. for characters with a more of that edgy, cool factor: Black Manta, Deathstroke, and James Gordon Jr. Sadly, there’s an awkward element to this book that negates a lot that coolness.

Government official Vic Sage (a character who was The Question in the pre-New 52 DC Universe) has been put in charge of the Suicide Squad. He recruits Deathstroke, Black Manta and Joker’s Daughter to the line up, an opts to keep Deadshot and Harley Quinn. Amanda Waller sticks around because she “generally knows the ins and outs of how all this works.” Our team’s first mission takes them to Russia to destroy a top secret base. But of course, they’re the Suicide Squad. And things go…well, how they usually go.

The Vic Sage character is clearly meant to be somewhat aloof and in over his head, at least on the surface. He seems largely concerned with the team’s look and marketability, and doesn’t seem to have much in-depth knowledge about them individually. In the opening scene he calls them “this clown girl,” and “the marksman with the red eye thing.” I also particularly enjoyed this line about Black Manta: “He does have a cool look. Plus, he’s got the word black in his name. That never hurts.” He’s got a humorous ineptitude about him that might be interesting when placed next to the ultra-serious Waller.

But what I have a problem with in that opening scene is how the secretary of state talks. It lacks a certain gravity, and thus he comes off a bit like the J.K. Simmons character in Burn After Reading. Also, and granted this is an odd point, but why is there nothing on his desk?

The scene where our five team members meet isn’t exactly inspiring either. The art itself isn’t bad, thought Deathstroke is wearing  football pads on his shoulders, and Harley Quinn still looks like a clown stripper. Again it comes down to the dialogue. We’ve got annoying expository name-dropping (“Deathstroke. Can we just get to the business at hand?” “Of course, Manta. I just needed to get everyone’s attention.”), combined with Deathstroke sounding like a dumb jock with a gun. When Harley and Joker’s Daughter get into it over the latter wearing Joker’s face, Slade shoves a gun in Harley’s mouth and delivers the awe-inspiring line: “Shut. Up. Or someone will be wearing your face, Harley Quinn.” By God, what a master of manipulation and intimidation…

Also, Amanda Waller is still skinny. Amanda Waller should not be skinny. Put her on a steady diet of Five Guys, then gimmie a call.

All this being said, New Suicide Squad does have some interesting potential as far as infighting is concerned.. Putting Harley Quinn and Joker’s Daughter together obviously creates an inherent rivalry right off the bat, and injects the series with plenty of “Joker appeal.” This issue also drops a pretty blatant teaser for Deathstroke vs Deadshot, in what could be a fight to determine the world’s greatest assassin. Black Manta also makes for a hell of a wild card. He can certainly shake things up at any time. Suicide Squad vs. Aquaman, perhaps?

New Suicide Squad has, for the moment, piqued my interest. Compared to the old series, there’s more to sink your teeth into right off the bat. But unless Ryan and Roberts sharpen up their execution, as far as I’m concerned this book’ll be on track for the morgue.