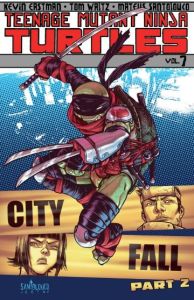 As a life long Ninja Turtles fan, I can’t even tell you how cool it was to see that last page in issue #27, where Bebop and Rocksteady finally make their IDW debut (a portion of which is shown below). Not only that, but they look bad ass. They’ve busted through a wall, and instead of holding ray guns like they did on the old cartoon show, Bebop is holding a friggin’ chainsaw, and Rocksteady’s got a sledgehammer. They look every bit like the sawed off (yet dimwitted) monsters you’d hope they’d be. Granted, it doesn’t really make sense for Rocksteady to have a sledgehammer, given that his fists are twice as big as it’s head. So he should really have the chainsaw. But you know what? Who the hell cares! It’s Bebop and Rocksteady, and they look bad ass!

As The Shredder tightens his grip on the organized crime factions in New York City, he has a new second-in-command at his side: Leonardo. Having been brainwashed by the witch Kitsune, Leo now believes his brothers to be dead, and Splinter to be a twisted manipulator. Now the Turtles must fight to bring their brother home, and once again face the Foot Clan head on. But in doing so, they’ll have to form an uneasy alliance with Old Hob and Slash. Meanwhile, Casey Jones sees a side of his estranged father he never knew existed. Sadly, father and soon seem destined to be on opposing sides. 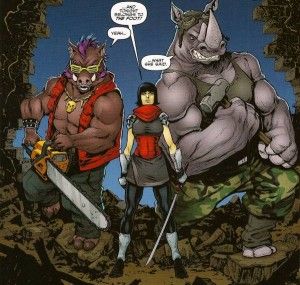 The City Fall story feels like something the entire series has been building up to. Kevin Eastman, Tom Waltz and the artists have had time to establish this version of the TMNT universe, who everyone is, etc. Thus, a story like this, which alters and shifts a lot of those relationships, is much more meaningful. Our climactic battle between the Turtles and the Foot successfully capitalizes on those high stakes, and is much better than the disappointing first encounter in Shadows of the Past.

The Turtles come into this fight shortly after losing two major battles to the Foot in the previous book, so we’ve got a good sense of just how merciless and powerful our bad guys are, and that it’s entirely possible for our heroes to lose again. Then, we crank up the intensity with the introduction of Bebop and Rocksteady, two enemies who are bigger and stronger than the Turtles, with Shredder, Karai, and a brainwashed Leo waiting in the wings. And all the while, we’ve got an entirely different battle happening elsewhere between Casey and his father, who has become the massive behemoth Hun. It’s a much better constructed, and because of the higher stakes, much more suspenseful than what we saw in Shadows of the Past.

The vision sequences between Leo and his mother Tang Shen are fairly strong, particularly the one at the beginning of issue #26. For one thing, the simple image of an anthropomorphic turtle walking beside a human woman, and looking up at her with such reverence, makes for a compelling visual. But in previous incarnations, we haven’t heard much about the Turtles having a mother. The reincarnation angle used in the IDW series opens up a new creative door in that respect. It might be compelling to see Eastman and Waltz play with this a bit more as the series progresses. 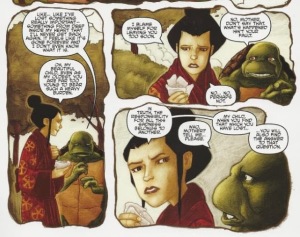 The biggest drawback in City Fall – Part 2 is that there are technically two fairly significant holes in the story. One involves Alopex, and the reasoning behind a major decision she makes during the book’s climax. The second involves Casey’s father, and how he makes the transformation into Hun. Both these things were addressed in issues of Teenage Mutant Ninja Turtles Microseries: Villains, which runs alongside the regular series. Neither of those issues are collected here. It doesn’t necessarily ruin anything, and for Hun, an annotation is made referencing his particular issue. But it’s frustrating that we don’t get to see how and why these two rather pivotal events take place. It’s one thing for the microseries issues to supplement what’s happening in the main book. It’s another thing entirely to stick major events in there that readers should know about. Ideally, we should be able to get all of our pertinent plot points from the main series. That didn’t happen with City Fall – Part 2.

What I said about Mateus Santolouco’s art in the last volume still stands here. The way he draws their faces, with the beaks that are subtly framed like human noses, and the larger bandanas, they almost have a cutesy quality to them. Cute is definitely not what we’re aiming for here. Still, he does a fantastic job of injecting so many different emotions into not only our resident mutant turtles, but a mutant cat, a mutant snow fox, a mutant rat, etc. However, the best panels in the book are drawn by Charles Paul Wilson III, who handled the first exchange between Leo and his mother (a portion of which is shown above). The brief change in texture and color scheme lent a lot to the notion of it being a vision or a dream sequence. 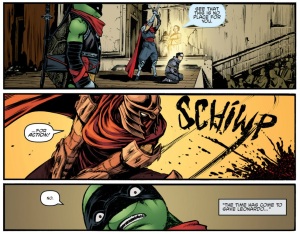 Without giving too much away, the last page of this story is encouraging. It seems to indicate that Eastman, Waltz, and Ross Campbell (the next artist in the rotation) are going to spend some time examining the consequences of Leo being brainwashed. City Fall tore this family apart, and it looks like the next chapter of this series will be about putting the family back together. Considering we didn’t get that kind of story when Raphael re-joined the team after Change is Constant, that’s good to see. It also looks like the events of this series will, to an extent, be mirroring certain events from Eastman and Peter Laird’s original series for the next several issues.

In the end, City Fall – Part 2 is the best we’ve yet seen from IDW’s Teenage Mutant Ninja Turtles series. By and large, it’s an emotional story about families being torn apart, and the lengths some will go to in order to bring them back together.

One thought on “A Ninja Turtles: City Fall – Part 2 Review – The Brainwashed Brother”