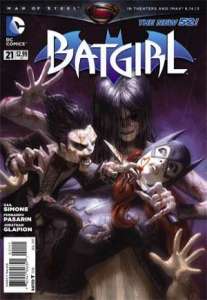 So…were the Batman baddies always slasher flick characters, and I just didn’t notice? You’d think after all these years reading comics, I’d have picked up on it. Granted, most of them have always been crazy. But while most of them weren’t necessarily opposed to killing, it wasn’t their trademark the way it was for, say, the Joker.

With Death of the Family, Scott Snyder and Greg Capullo gave the Joker a very Leatherface-type look. Of course, that came courtesy of the Dollmaker from Detective Comics, who had an obsession with wearing other people’s skin. If you’ve been following Gregg Hurwitz’s work on Batman: The Dark Knight, you know he’s taken the Scarecrow and the Mad Hatter to some really twisted, scary places. Some of it works really well, and some of it falls flat. Obviously Batman’s nature as a “dark” character lends him to stories like this. But honestly, I’ve had my fill of that kind of thing for now. Or at least the high volume of it we’ve had lately. That’s probably why I’m so sour on Batgirl #21.

This issue sees Barbara take on the New 52 version of the Ventriloquist. The character was originally created as a middle-aged man who carried a gangster puppet named Scarface, who was the “brains” of the operation. The puppet we see here, Ferdie, was obviously inspired by the Jigsaw character from the Saw movies. And the Ventriloquist, now an 18-year-old reality TV reject named Shauna Blazer, is very much a play off of horror flicks we’ve seen in the last 10 years. She dresses in white, has long dark hair and pasty skin. Think The Ring, The Grudge, that kind of stuff. She can throw her voice and mimic others effectively enough that it confuses her enemies, and she apparently has telekinetic powers, which means she can control Ferdie from a distance.

The climactic fight takes place in a dark, dirty, run down home, which stinks of rotten meat. There are two corpses sitting at a table, which Blazer proceeds to control using her telekinesis. There’s a decent amount of blood here, as Barbara gets stabbed by a drill protruding from the puppet’s hand. The corpses also wind up dismantled, which in turn causes our hero to vomit…icky.

These aren’t bad ideas, per se. But the tone it’s done it is has been so overdone lately it’s a turn off. You know what I miss right about now? The Greg Rucka/Ed Brubaker style Batman stories, i.e. content which wasn’t afraid to be bloody when the story called for it, but in the end focused more on on the crime drama elements. Heck, what about what Gail Simone used to do with Birds of Prey? The whole thrilling adventure elements mixed with the camaraderie and banter between characters? Can’t we do a book like that? If we’re going to have all these Bat books, can’t we diversify them a little bit? Does everything have to be a horror story? 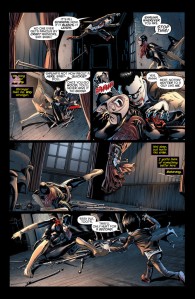 In terms of what Simone is doing with Barbara’s character here, I’m in better spirits. After what happened with her brother a couple of issues ago, it makes sense for her to undergo a bit of a crisis of conscience. Not even in terms of giving up her crime fighting career, but of being worthy to wear the Bat symbol. I think that’s a cool idea.

In contrast, Simone will occasionally give Babs a downright brutal line that taints the whole issue. During Death of the Family, it was “You make be believe there is a Satan, Joker.” In this issue, when Batgirl sees a collection of newspaper clippings on Shauna’s wall which deal with homicides, we get: “She…she’s a fan of murder.” Sorry Gail, but…*gag*.

In all fairness, when judged on its own merits, Batgirl #21 really isn’t that bad. Yes, that one line was a face-palmer. But it’s only when you start looking at it next to the other Bat books that the real problems arise. Ferndando Pasarin’s pencils look great, and there’s still no one else I’d rather have writing this book than Gail Simone. But I’m still holding out hope that this book will one day be as fun as her work on Birds of Prey was. But I suppose the longer we wait, the less likely it is…