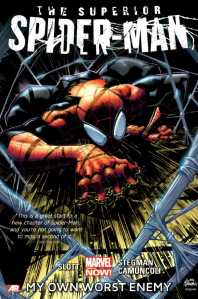 The Superior Spider-Man is one of the few superhero titles I’ve ever read that really has the total package. It’s got action, drama, comedy, new characters, classic characters used in new and interesting ways, an agonizing predicament for our hero. In terms of a new Spider-Man series, there’s really not much more you can ask for. 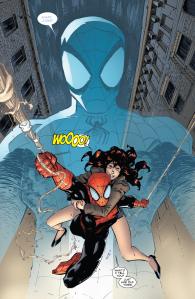 Peter Parker is dead…sort of. In the final issues of The Amazing Spider-Man, a dying Dr. Octopus switched bodies with the wall crawler. A short time later, despite his best efforts, Peter died in his old enemies frail body. But in taking Spider-Man’s body, Otto also gained access to Peter’s memories. After seeing all his old enemy has gone through, Otto is inspired to leave his life as a villain behind and pick up where Peter left off. Vowing to become a superior Spider-Man, he takes to the city streets. But although he has Peter’s memories, Otto hasn’t absorbed all of Parker’s noble resolve. And he certainly isn’t playing by the same rules. In some ways, Otto will indeed improve on what Peter started. But in others he’ll take a decidedly darker, more violent approach. But even the brilliant Otto doesn’t know that a small part of Peter still exists inside his mind…

It’s a lot of fun to read The Superior Spider-Man. More than anything, what impresses me about My Own Worst Enemy is is the way Slott and the creative team use this predicament between Otto and Peter as a tool for both comedy and drama. In some ways, Octavius is very much the mustache-twirling supervillain here. he talks to his colleagues like they’re minions, when he’s in the lab he dresses like a mad scientist, and he lets the creepy supervillain laugh loose in public. He’s also more than a little excited about getting the girl, i.e. Mary Jane Watson. Some of the things Ryan Stegman does with Otto/Peter’s body language is great.

But at the same time, there’s some pretty heavy stuff happening here. We flash back to Otto’s childhood traumas and see how they continue to influence him. He beats a few supervillains half to death, including his old pal the Vulture when they unknowingly hit too close to home. And inevitably, we get the “Why don’t I just kill the bad guys?” question. It’s great character work, and it humanizes Otto very well. We’re rooting for Peter, of course. But we’re also rooting for Otto to learn the correct lessons and do the right thing. Sometimes he does, sometimes he doesn’t. Such is the way of things, I suppose.

One of my favorite Chicago area comic book writers, Dirk Manning, once wrote that Dan Slott was born to write The Amazing Spider-Man. As it turns out, he may also have been born to write The Superior Spider-Man. My Own Worst Enemy is a story which provides the darkness you’d expect from an in-depth look at a villain like Doc Ock. But it manages to balance it with the action and humor fans come to expect from good Spider-Man stories. And despite the controversy this series sparked, this is good Spider-Man.

2 thoughts on “A Superior Spider-Man: My Own Worst Enemy Review – Invasion of the Body Switcher”