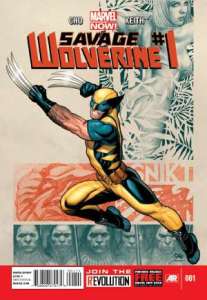 I’m not sure if I’m any more of a Wolverine fan after reading the debut issue of Savage Wolverine. But I’m a Shanna the She-Devil fan for sure!

After Shanna and handful of S.H.I.E.L.D. agents crash into the Savage Land during a cartography mission, Wolverine is dispatched to save them. But the Savage Land lives up to its name, as Wolvie faces off against hostile natives, and even a few cranky dinosaurs.

Frank Cho’s amazingly gorgeous art is almost enough of a reason on its own to pick Savage up. His rendition of Shanna the She-Devil is pure cheesecake. Particularly enjoyable was the full page, full body profile shot of our muscular and powerful, yet most definitely feminine heroine laid out against a page consisting largely of white space, with panels depicting the S.H.I.E.L.D group’s predicament almost extending from her body. It’s a gorgeous page. Though I’m not expecting my girlfriend (or anybody‘s girlfriend for that matter) to be much of a Shanna fan after this issue. 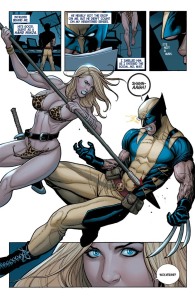 The way Cho plays with white space in his layouts is also very interesting. Whether he uses it to draw focus to certain things, such as the lovely Shanna in the aforementioned page, or simply as a way to guide readers through the layout, it makes for a very interesting visual journey.

The curious thing about the story being told, at least at this point, is that despite having his name on the book, Wolverine doesn’t really need to be there. Based on what we’ve seen so far, Cho could simply have made this a Shanna the She-Devil story about survival in the Savage Land. The only reason Wolverine seems to be there is to make the story more marketable to casual fans. Mind you, we’re only one chapter in. But that’s the vibe I’m getting so far.

The Logan we get from Cho juxtaposes the character’s trademark penchant for blood and violence with a relaxed, analytical side one might expect from a hero with this much experience. When we first see him, he’s analyzing his surroundings, drawing conclusions based on the climate and the presence of things like volcanic ash. Then he tangles with a dinosaur. Moments later, we see him label a group of natives as neanderthals based on the spread of their toes. And then he’s chopping their limbs off. It’s not necessarily what you’d expect from a book called Savage Wolverine, but it’s interesting to watch nevertheless.Whether readers will enjoy this issue likely depends on their level of enjoyment for Cho’s art. For Cho’s fans, this is a can’t miss book. For Wolverine fans, the verdict is still out.