Nobody can deny Ultimate Peter Parker had his share of problems. But at least he never got mixed up in a friggin’ war that divided the country. But Miles Morales endured. While he was still learning the ins and outs of the hero business, no less!

Shortly after a fateful showdown with his Uncle Aaron, a.k.a. the notorious Prowler, our new Spider-Man finds himself in the middle of a conflict that has literally split America apart. As The Ultimates do battle with the Hydra, Miles must prove to Captain America that he’s worthy of being the new Spider-Man. Worthy or not, Miles will soon be hanging with Iron Man, Thor, and a person who’s not overly fond of him, Spider-Woman.

With the Miles Morales character, Brian Michael Bendis continues to play around with some of the same themes that went into shaping Peter Parker, but inverting them to give Miles a different, yet familiar story. In almost every version we’ve seen of Spider-Man’s world, Peter’s Uncle Ben is virtually a saint. He’s a warm hearted, nurturing presence in Peter’s life, who teaches him that all important lesson of power and responsibility. Miles’ Uncle Aaron is, to put it mildly, not a saint. When the Prowler learns of his nephew’s new abilities, he uses his relationship with Miles to make a power play on the city’s crime scene.

Fittingly enough, Miles ends up learning a lesson about power and responsibility from his uncle, just as Peter learned one from his. Sadly, what happens to Miles’ uncle also leaves him with a similar sense of guilt. The themes are the same, but the circumstances are different. It’s very clever.

Once we get into the “Divided We Fall” storyline, things start to get bumpy. It’s difficult not to compare Miles’ journey to Peter’s, given they’re on such parallel paths. At this point in the original Ultimate Spider-Man book, Peter hadn’t really ventured into the grander Ultimate Marvel universe yet. His supporting cast was expanding in the form of a modernized Gwen Stacy, as was his rogues gallery in the form of an angry and vengeful Dr. Octopus. With Miles, a lot of that same expansion is missing. Granted, this is a different ball game entirely. In the original series, Bendis was reworking a classic set of characters. Miles is an entirely new character running around in a universe that’s already very familiar to us. But as Miles is still learning how to be a hero at this point, I’d have rather seen him on his own, as opposed to getting swept up in a crossover.

Still, Bendis makes the best of the situation and provides us with some good character moments along the way, the best of which happen in issues #13 and #14 when Miles meets Aunt May, Gwen Stacy and Mary Jane Watson. It’s a pivotal passing of the torch moment, which for good measure includes Captain America. Cap comes around on the issue of there being a new Spider-Man a little fast for my taste, but it was the best we could hope for in order to get Miles into the big battle fairly quickly. 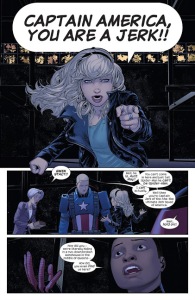 In terms of his trademark witty dialogue, Bendis manages to hit the mark a little better this time around. Miles’ best friend and confidant Ganke came off strong in this book, particularly in the scene where he’s geeking out over little phrases and tag lines Miles could yell out during fights (“Yahtzee! “Sacagawea!” “Charles Barkley!”). I get the impression that Bendis sees a lot of his childhood self in Ganke. But in terms of humor, the best line in the book belonged to Gwen Stacy. When Cap arrives to rain in Miles’ meeting with Aunt May and the others, she says: “I didn’t know the eagle from the Muppets was going to show up and fart on us.” There’s a visual for ya…

While the previous volume had a problem with a revolving door of artists, David Marquez stays with us for the majority of this book. For my money, he now has as much claim to shaping the Miles Morales in his “formative” years as Sara Pichelli, if not a little more. During the “Divided” proceedings we get a two-issue interlude from Pepe Larraz, who does alright. The fact that he has the same colorist as Marquez helps the proceedings.

Thankfully, now that the big war is over Miles can get back to more “local issues” in New York, which hopefully won’t involve big name heroes. Thus far Miles’ adventures have had their downsides, but Ultimate Comics Spider-Man still has its own distinct charm.

One thought on “An Ultimate Comics Spider-Man, Vol. 3 Review – Hangin’ With the Big Guns”