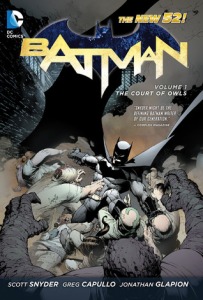 This book represents the start of a lot of new things. It’s the start of a new chapter in the Batman ongoing series. It’s the start of Scott Snyder’s run with Bruce Wayne, as opposed to Dick Grayson, who he worked with in books like The Black Mirror. It’s the start of Batman’s battle with the elusive Court of Owls. These are all good things. But as good as they are, and as much acclaim as Snyder and Capullo’s run has gotten from fans, it’s not spotless as far as I’m concerned. There are a few little things that put a damper on this story for me. Yes, I’m going to be that annoying, nitpicky fan here. But I nitpick because I love these characters and this world. That’s my excuse.

In one of our first outings with Batman and company in the “New 52″ universe, Bruce Wayne is looking to breathe some new life into Gotham’s more troubled territories with an aggressive rebuilding initiative. This attracts the attention of not only mayoral candidate Lincoln March, but the Court of Owls. Thought to be merely the stuff of Gotham folklore, the centuries-old Court makes their presence known with a grisly murder. To make matters much, MUCH worse, the DNA of none other than Dick Grayson, a.k.a. Nightwing, is found at the crime scene. Now Batman must unravel the mystery of the Court of Owls. Little does he know how the Court will push him to both his physical and psychological limits. 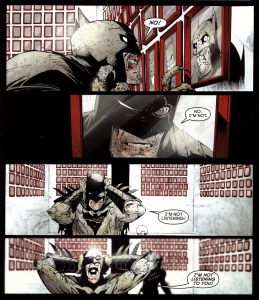 One of the things that really impressed me about this book was the way Snyder and Capullo sold the Court of Owls to us by having them put Batman through the ringer. For most of the second half of this book, Batman is trapped in a big maze the Court has set up. He desperately fights to stay in the shadows, as much of the maze is coated in white light. He’s been drugged, so he keeps hallucinating that he’s transforming into an owl, among other mental atrocities. They also have one of his “lenses,” i.e. the little white slits that always make up his eyes, knocked out. So he’s got one slit, and one eye that’s really wide and bloodshot. That’s a great little touch. And of course, they beat the heck out of him. But it’s tough to remember a time when Batman was pushed to the brink on every level like that. The only other instance that immediately comes to mind is the Knightfall storyline during the early ’90s.

The Court of Owls are a nice addition to Batman’s iconic gallery of foes. The Talons, assassins that work for the Court, are designed quite nicely and prove to be tough opponents for even Batman to match up with. The fact that owls have that predatory connection to bats is also really cool.

Alright, let’s get picky. I would argue that Capullo’s Dick Grayson looks much too young. Compare how he looks here to how Eddy Barrows is drawing him in the monthly Nightwing series right now. Under Barrows, Dick looks like he’s in his early to mid twenties. Under Capullo, he could still be in his late teens. I’m not sure how old the New 52 Nightwing is supposed to be, but I’m leaning toward Barrows’ side on this one. Nightwing has always been portrayed as the Robin who matured and grew into his own. I’m not sure Capullo captured that here, and he may have realized that as the issues progressed. Nightwing looks a tad older during the tail end of the book, and in recent issues of Batman.

The computerized contact lenses we see Bruce use in this book are incredibly corny. I understand Batman’s got more than his fair share of gadgets. But c’mon, really? He even uses them to read lips during the first issue. Because he’s smart enough to invent friggin’ computer contact lenses, but reading lips is just too far outside the realm of possibility. 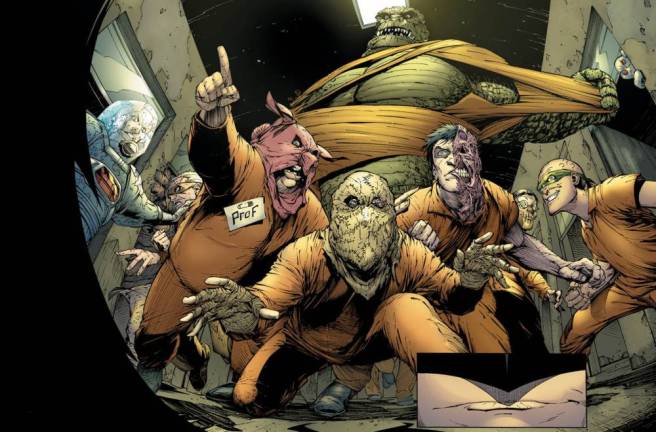 This is a really small detail in the grand scheme of things, but when we open the book we see Batman facing off against the inmates of Arkham Asylum as they have him cornered. It’s a wonderful way to kick off this new chapter of Batman, but his renderings of the Joker, Two-Face, and particularly the Riddler rubbed me the wrong way. Mr. J. looks too scraggly and smeary for my taste, a bit too much like the Batman: Knight of Vengeance version of the character. Two-Face has a similar issue. In the very beginning of this book, there’s a two-page splash shot of Batman’s enemies staring him down (shown left). At in the front we see Two-Face, and the deformed skin on his right side literally appears to be falling off his head. I’ve never seen Two-Face look so…flappy.

But poor Riddler got the worst of it. That’s him on the far right side of the image. Not only does he have little question marks either shaved or tattooed into his head, but Capullo felt the need to give him a green mohawk shaped like a question mark (which you can clearly see on the cover). Hey Greg, here’s a riddle for ya: Why????

Relentless nitpicking aside, The Court of Owls is actually my favorite Batman story Scott Snyder has done so far. It introduces a cool new group of villains, and gives his a compelling glimpse into the mind of Bruce Wayne. I’m hopeful Snyder and Capullo can do better, but this is a fine start.

Image 1 from comicsbulletin.com. Image 2 from 4thletter.net. Image 3 from author’s collection.

4 thoughts on “A Batman: The Court of Owls Review – What a Hoot!”